I write a lot about climate change on my other blog, and so I don’t really feel a strong need to touch on this topic very often here. But when you think about it, climate change might be more important to the people who read 10,000 Birds than a lot of other groups of people.

People like to deny the reality of climate change, but it is real, and sea level rise is part of that. We see indirect but very compelling evidence of this when insurance companies, government agencies, and other big players act as though they considered climate change to be real. That is not a direct scientific argmuement for the reality of climate change, but it is nonetheless important and convincing. And, in that area there is something every bird lover will be interested in: I’ve recently heard that the Maryland Department of Natural Resources may be implementing a new policy dictated by the realities of climate change. This would be to avoid conservation related funding for areas at or below 2 feet above sea level, given the prospects of rising seas due to climate change.

This might seem like an extreme reaction, maybe an unfair one, but I don’t think it is either. This is an appropriate policy decision. There is no sense in acting as though areas at or below 2 feet above sea level in a coastal region will benefit from any long term conservation effort. This applies, I think, not only to marshes but to infrastructure. A few years ago, the Maryland DNR decided to elevate some of its structures by a couple of feet in order to get them out of the way of impending sea level rise. Pulling back from the sea, and avoiding long term investment in areas that will shortly be inundated (and moving those resources elsewhere) is good policy. The important thing here is that yet another major institution, in this case they Maryland DNR, is acting as though climate change and sea level rise is real. Because it is.

Getting back to the marshes and other coastal natural environments, it isn’t simply the case that the marshes will move inland. There are three things that will go wrong:

1) The inland zones that would become the new wetlands are already, in many cases, occupied by human-built things that will severely interfere with this process. There are extensive settlements, parking lots, and roads near existing coastal wetlands. A parking lot will take centuries to become a salt marsh if it is flooded. Also, these human-occupied area are probably full of toxins and other impediments to normal use by wildlife.

2) The various coastal wetland features will not simply reform uphill from existing features. A place that is now an embayment that could contain a broad salt marsh may be overlooked by hills that will not become a good salt marsh. What is now conservation land owned by state or federal authorities may be lost, and the new coastal wetland features may form on unprotected or otherwise inappropriate land.

3) There is evidence that as coastal features form under sea level rise, many features we have taken for granted over the last several centuries will not re-form until sea level rise levels off, which may be centuries from now. It takes a long time of relatively stable sea level to form strong barrier beaches and broad and productive salt marshes. These features will become rare.

The birds are in trouble and some of them are going to go extinct because of climate change. I’ve not look at this directly, but I’m guessing that the wintering grounds of the Whooping Crane are at risk of destruction by sea level rise. The timing of seasonal changes is shifting, so that some birds are at risk of showing up at the right place at the wrong time (see: Birds migrating at wrong time for warmer climate)

And penguins. Forget about penguins. The Galapagos and South African penguins may be OK but many of those living in the Antarctic are doomed.

“The birds” as a whole will be “fine” but many individual species will not. I truly hope that there are no climate change denialists among the bird lovers. That would be very, very annoying.

There is a new report coming out, called “Shifting Skies: Confronting the Climate Crisis.” Here’s the information I have on it:

With 2012 breaking records as America’s hottest year ever, America’s migratory birds face unique challenges because of their long journeys and need for multiple habitats. Their remarkable survival skills, evolved over thousands of years, rely on a chain of stopover feeding grounds and habitats for breeding and raising young – but break any one link and the survival of the entire species is threatened.

At least 350 bird species in North America go to South or Central America in the fall and return in the spring. Climate change is the biggest threat to migratory birds this century. Migratory birds are at particular risk, requiring multiple and specialized habitats to breed, raise their young, migrate and overwinter. From drying up wetlands to shrinking mountaintop cool zones, rising temperatures are shifting, altering and destroying habitats.

I asked Douglas B. Inkley, senior scientist at the National Wildlife Federation a few questions. Since all my questions were brilliant and all his answers were fascinating, I’ll just give them to you straight:

GL: Isn’t there a particular risk to migratory birds that require coast wetlands for some part of their life cycle, given that these areas may suffer significant changes from sea level rise?

Inkley: Coastal birds are especially vulnerable to disappearing habitat due to sea level rise, especially wherever “hardening of the beaches,” such as the building of seawalls, is attempted to resist increasing coastal erosion.”

GL: Aha. I hadn’t thought about that. Climate change “mitigation” is rather human focused.

Are birds that migrate to temperate regions that are now warmer at greater risk of disease, given that parasite loads and other disease effects are often stronger in warmer regions? I.e., will a lack of, or reduced, winter kill-offs of parasites affect these birds?

Inkley: Migratory birds are especially susceptible to climate change because they require multiple habitats to breed, migrate and overwinter. Break just one link of the chain and the entire species is in trouble.

GL: What was the biggest surprise you encountered when putting together this project?

Inkley: I was surprised to find from the scientific literature that even for a single species, the effects of climate change can vary in different areas of that species’ range.

GL: If you had one thing to say to, say, President Obama (or the US congress, if you like) right now…advice, warning, etc. … what would it be?

Inkley: Humans, like birds, are very vulnerable to climate change in so many different ways. This is the time for Congress to show leadership for U.S. citizens and the wildlife resources we enjoy by building a clean energy future and reduce carbon pollution. 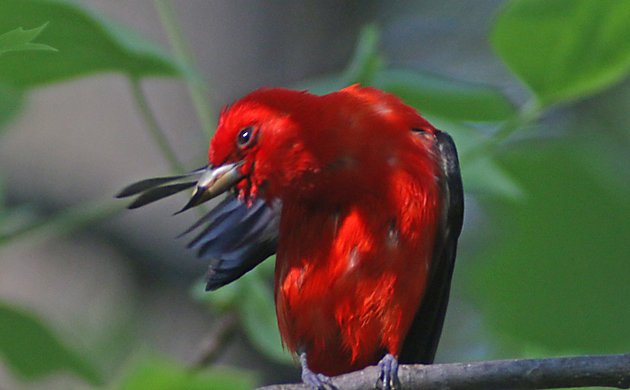 Scarlet and Indigo at the Forest Park Waterhole