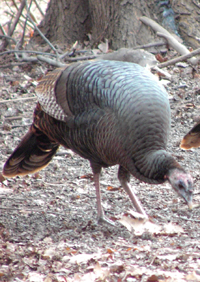 The holidays are a hectic time for the Core Team, pretty much one party after another. However, no one can accuse us of not having our priorities straight. Our birding friend, Bill called us over the weekend confident that he could make good on his promise to show us an owl. He told us that he knew where a Great Horned Owl could be found and he was ready to bring us right to it. Well, who couldn’t spare a few hours for that?

We met at the Marshlands Conservancy in Rye, NY. Marshlands is a 173-acre wildlife sanctuary composed of a diversity of habitats, including forest, meadow, salt marsh, and shoreline along the Long Island Sound. It’s also a Westchester County birding hotspot.

The first great sighting of the day occurred as soon as we arrived. There is a small nature center/toolshed adjacent to the parking lot, behind which are an array of feeders. A great plate glass window looks out onto the feeders. Sunday morning, about a dozen Wild Turkey were enjoying breakfast at the feeders, literally right up against the huge window. I can’t imagine a way to get closer to these magnificent birds.

After gazing on the gobblers for a while, we tore ourselves away to pursue our quest. A well-maintained, but hard to find trail leads from the main road to the John Jay cemetery, which I presume is a historical landmark. It is also private property. Bill pointed out the line of conifers that the Great Horned is known to call home and offered sage advice on how to spot such an owl: check the branches close to the trunk and look for the telltale silhouette. Sara did not need to be told twice; she spotted the owl in less than a minute. As a matter of fact, after a few moments more, she spotted a second owl right next to the first. This owl was perched right in front of the trunk. It was perfectly camouflaged until it turned around to see what the ruckus was, thus exposing its white bib. This pair of Great Horned Owls was superb. We couldn’t get as close as we would have liked, since the cemetery was locked, but we had as much time as we wished to admire them.

Further investigation of Marshlands revealed Mourning Dove, White-throated Sparrow, American Goldfinch, Black-capped Chickadee, Tufted Titmouse, American Black Duck, American Wigeon, and a variety of other common winter birds. Since we had more time to spend, Bill lead us to the Edith G. Read Wildlife Sanctuary nearby. Read Sanctuary is a hidden gem for birders, difficult to find because one has to drive through the amusement park, Rye Playland to find it. Thousands of waterfowl visit this site in winter. Although numbers weren’t that impressive when we visited, we did see Canada Goose, Mute Swan, Great Blue Heron, Bufflehead, and a brand new bird, a mated pair of Hooded Merganser. Anyone who has seen a male Hooded Merganser knows how striking they are. If only we could have gotten close enough to take a picture. Nonetheless, it was a great, albeit cold, spot of birding, and we were able to proceed to our next holiday celebration two birds the richer.