You may already know how awesome Arctic Terns are. Clocking more than 50,000 miles per year, the birds appear to have cornered the market on the world’s longest annual migration. It probably helps that they weigh less than 5 ounces! (You can learn more about their incredible journeys here.)

Perhaps because of threats to the ecosystems of the many places the Arctic Tern visits (Europe, Africa, South America, and North America), it may be on the decline. For example, over the past decade, the population in the Gulf of Maine has dropped by 40 percent. Some of those once-popular breeding spots now produce no chicks at all.

So that’s why it’s awesome that webcams sponsored by Audubon and explore.org are providing a close-up peek into Arctic Tern nests on Seal Island along Maine’s coast. A few chicks have already hatched, and more are due any day now. In addition to live video feeds, the website also has a comments board for questions and general exclamations of delight.

If Arctic Tern chicks aren’t your thing (and if they’re not, by golly, you’re missing out on an awful lot of cuteness), explore.org also boasts webcams for Atlantic Puffins, Osprey, Common Terns, Great Horned Owls, Long-eared Owls, and Magellanic Penguins. And that’s just the birds–you can spy on everything from panda bear cubs to beluga whales. (Plus, we’re told, the brown bear cam features frequent cameos by Bald Eagles!) Photos courtesy of explore.org/projectpuffin and Audubon. 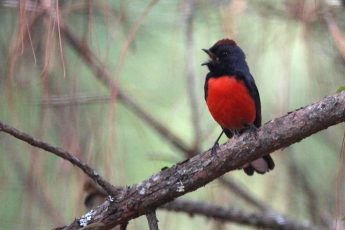 « Previous post
Birding Flagstaff: A Green Detour
Next post »
Where Are You Birding This Fourth Weekend of June 2013?