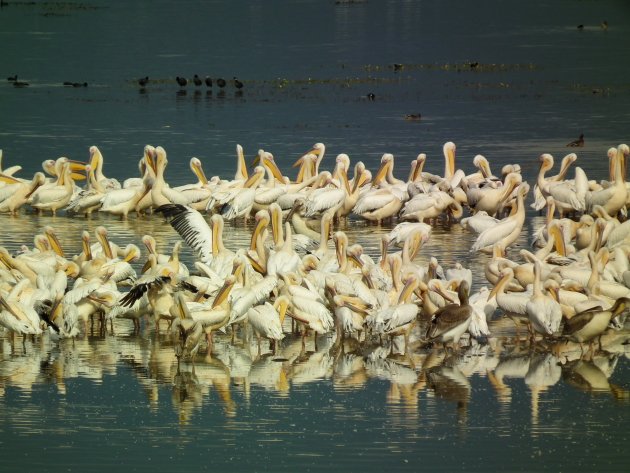 Early September morning. The sun rises over the village of Chrysochorafa, by Kerkini Lake in the north of Greece, not far from the triple border with Bulgaria and FYRO Macedonia. Barn Swallows and Eurasian Collared Doves on the wires… I was here for the first time in April this year (find about it here) and easily made up my mind: this is a place worthy of many returns. Before this trip, I asked Steve Mills, the author of ‘Birdwatching in Northern Greece’, which sites would he recommend at this time of the year. His answer was, this site is already dry, that one may not be too bad, but the Kerkini is always good. A „magical place“, he calls it in that chapter of his book. „Magical“ is one of those words that suffer from overuse and I usually avoid it – but in this case, I cannot think of a better description.

Just out of the village lies the pumping station that controls the amount of water released into the irrigation canals. The system starts with a small pool bursting with Little Egrets, Pygmy and Great Cormorants, Black-headed Gulls… I am driving by it and, through the opening in the bushes, see a… Pelican! Such a large bird in such a small pool and only the first of many Dalmatian Pelicans I will see that day. The catch is, the station often pumps some small fish into the pool, hence the jolly bird party.

By the chapel, built on the dyke itself (I cannot imagine getting a construction permit to build on such a site), we reach the Kerkini eastern dyke – a legend among birders (or, if by some mistake it isn’t yet, it most certainly should be, at least as famous as Cley in East Anglia). The origin of the lake dates back to the 1920s, when the River Strymonas was dammed for irrigation purposes. The shallows at the place where the river enters the lake – the „delta“, quickly become a heaven for birds. And some time later, for birders. The sky is gray and every now and then, it drizzles. In front of us, just above the dyke dirt road, one Common Kingfisher flies over. Despite minor potholes here and there, the dirt track is easily manageable for low clearance cars. The Dalmatian Pelicans line the lake shore, especially by the small beach opposite Limnochori village, where local fisherman tie their flat-bottomed boats and, after fishing – feed the birds with small fish, not worth taking to the market.

It seems that early September is the peak of autumn migration for Eurasian Golden Orioles. Bright yellow males and yellow-green females were taking off from one side of the road to fly into the treecrowns at the other side. Previously, I have probably seen a maximum of four of them at once, but on this day, as it will turn out, I will see about 30 birds, scattered in flocks of 5 to 10.

Spotted Flycatchers are at the peak of their migration, too. I am trying to tell apart the swallows, flying too close too fast. Even when I do manage to get them in the field of view of my binoculars, they disappear too quickly to be sure, but some time later, I realise than I am surrounded by both Barn Swallows and the Common Sand Martins (Bank Swallows). Almost 10 km later, the water gets more shallow, birds more numerous and birding becomes a bird fever (not to be confused with a bird flu). The choice of species is such that I do not know where to look first.

Numerous flocks of White Pelicans make for the largest and the most obvious species. As it will turn out, small flocks of the Dalmatians were scattered all over the lake, perhaps a hundred or so birds, while several hundred White Pelicans were here, in the Strymonas „delta“. In mid-eclipse, ducks posed quite a challenge. One Common Pochard was the only smartly-dressed male, while all the others looked like females and were mostly recogniseable by shape or mirror. With a lot of effort, I IDd 8 species. On and off, the rolling „prrut“ of European Bee-eaters was audible from the nearby treecrowns, but I’ve tried to discipline myself not to give them much attention – I can see them back in my home city, why travel all this way for them? Far off, Greater Flamingos were foraging, perhaps 1500 of them. A flock of Black-headed Gulls at the mudbar, several Wood Sandpipers walking among them… and one… hmm… tern? Like the gulls, the tern, too, has turned its back towards me, slightly larger, legs and primaries black. Showing only its nape with a winter, salt ’n pepper cap. A 1st winter Caspian Tern, what else? In my native Serbia, I observe them every few years, but… I cannot see its bill. It should be bright orange-red and the size of a small carrot, but all I can see is its nape. I found the bird while scanning the mudbars by scope so am not sure where it is and cannot find it with binoculars. The sun scares the rainy clouds away and it suddenly becomes bright sunny and the air unbearably moist. And I cannot afford to take my eye off the Swarovski STX (more about the scope in a few weeks).

Finally! The bird turns its head slightly, showing me only the tip of its bill, but that is enough to confirm the ID. This turned to be only the first of about dozen observations of this bird, as it later patrolled the dyke north and south.

Avocets and Black-winged Stilts, Spotted Redshanks and Green Sandpipers, Black-tailed Godwits, Glossy Ibises, one Black Stork and a flock of Eurasian Spoonbills are all foraging on the mudbars. Along the dyke, Whitethroat, Blackcap, Tree Pipit, Chiffchaff, Cirl Bunting, Wheatears, Whinchats and Red-backed Shrikes line the bushes… and something else that puzzles me. In flight, it somewhat resembles the White Wagtail and looks familiar, like something I should know and recognise, but it always lands in the middle of a bush. One more, right in front of a car… this time I can see it through the opening among the leaves. Grabbing binoculars… to realise it is a young Lesser Grey Shrike.

We are leaving the legendary dyke, only to lose our way in a maze of dykes and tyre tracks in the grass around the Strymonas River course before it enters the lake. The track aren’t bad, but there was a lot of rain on previous days and several puddles worry me (I am not driving a rented car, but my own). I ask the first tractor driver for the way to the bridge across the river and he suggests going left. Ok, I go left, but am doubtful about that suggestion, so I ask the first motorcycle driver that comes by, and he tells me to go right. Ok, that makes more sense, but which set of tracks to follow? He speaks only Greek, but seeing the uncertainty on my face, sits on his bike and retraces his route to show me the way.

It seems that the least obvious set of tracks lead to the bridge (since I do know that people from the reserve management team have read my last blog on Kerkini, here is a suggestion for them: a sign or two with a painted bridge and an arrow would make quite a difference). After the bridge, we continue along the northern shore of the lake. And above the road, a smaller raptor is chasing a big one!

I brake for raptors – anytime, anywhere! Although I have seen the bigger bird in my native Serbia only a couple of times, it is an easy one (and, to make it easier, I observed it often in India – thanks, Chiku): the light morph of the Booted Eagle. The birds are disappearing in the direction I have come from, so I make a U-turn and start the chase. Yeehaw! Whenever I try to stop to observe them, they vanish behind the nearest treecrown. In the end, my eagle goes toward the slopes of 2 km high Mt. Beles, while the smaller bird I didn’t get the chance to properly see at all.

The rain overtakes the sun once again and in the village of Livadia, I miss the turn off for the western dyke (it should be marked as the „Lake Kerkini Port“ or something) and enter the normal tarmac between the villages. And the rain becomes a shower, so I bird in rare few moments, windows half-open.

Near Kerkini village, I find a mixed flock of Collared and Turtle Doves on the wires. While belonging to the same genus, the Collared Doves live next to people, while Turtle Doves tend to choose more open space in between and I cannot recall ever observing a mixed flock in Serbia.

South of village, the tarmac more or less follows the lake shore, dotted with several bird towers (why there, I still don’t know). In the shallows of the Kerkinitis River mouth, Dalmatian Pelicans are feeding, Common Terns resting, White Storks foraging, while above all of them, a Lesser-spotted Eagle soars. As soon as it disappears, another eagle – Short-toed Snake Eagle appears, with a snake half dangling from its beak.

Before the day ends, I will see some 74 species of birds – quite a good score. In Serbia, such daily birdlists aren’t uncommon in spring, but September lists are usually closer to 40 or 50 species. Lake Kerkini is not just one of the best birding spots of Greece – it is most definitively among the very best in the whole of Balkans. How many days: Two or three – minimum, four or five – better.

Organised bird-tours to this and nearby sites: Natural Greece (@: naturalgreece@outlook.com).

Distances: The Lake Kerkini lies some 100 km away from Thessaloniki, Greece’s second largest city. The Limneo Hotel owner, Nikos Gallios, personally picks his guest by car at the Thessaloniki airport.

Where to watch birds: The most detailed description of the area is to be found in the already mentioned guide Birdwatching in Northern Greece by Steve Mills.

« Previous post
Where Are You Birding This Third Weekend of September 2014?
Next post »
Birders Should Attend the People’s Climate March