Author Sherrida Woodley finds inspiration in bygone birds; the dearly departed Passenger Pigeon plays a pivotal role in her award-winning bio-thriller, Quick Fall of Light. However, equally inspiring to Sherri are  renowned birders and naturalists from earlier times. After experiencing the Rachel Carson Commemorative in Duxbury, MA, she was moved to share some little-known facts about this tremendously influential nature writer’s interest in birds…

I was thirteen when my mother and I took turns reading aloud the new bestseller, Silent Spring, on family vacation the summer of 1963. Maybe it was because we read Rachel Carson’s words out loud that her warnings about the silence of birds stayed with me. Even now, some fifty years later, I pay close attention to the last few robins of every fall, noting their growing restlessness and sending them an internal plea to return in a few short months. Carson’s phrases embedded themselves in my young, nature-absorbent mind, and I never forgot the urgency of them. She’d written at least three books before Silent Spring, all of them well-known about the sea. But it took me time to find them and even more to discover her early writings about birds. 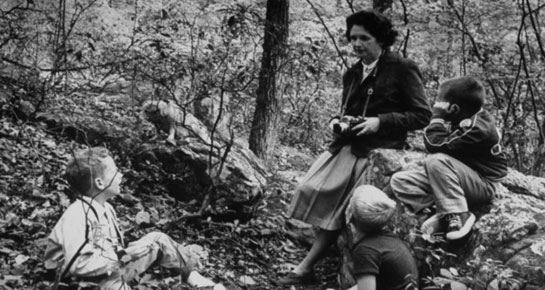 Birds, it turns out, were a thriving interest for Rachel Carson. Growing up in western Pennsylvania, she explored nearby woodlands with her mother, a naturalist, who encouraged her daughter to observe all of nature, which ultimately led to Carson’s early stories about birds. Educated at Pennsylvania College for Women and Johns Hopkins University, she went on to become a marine biologist and eventually worked for the U.S. Fish & Wildlife Service, where she wrote and became chief editor of all publications. Her compositions were remarkable for a blend of science with the craftsmanship of an accomplished writer and tended to reveal little-known facts, such as in her story of the chimney swift. In short, brilliant prose, she described the swift’s unusual union with the sky, drinking and bathing on the wing, never alighting on the ground, even dying in the sky. It’s impossible to know what compels a writer, but I had the feeling when reading her detailed account that she felt a kinship with the bird, identifying with its detachment from the ordinary.

In the early 1940s, Carson often went on birding trips with companions, including artist Roger Tory Peterson, who referred to their group as the “field glass fraternity.” Her first book, Under the Sea-Wind, was published during this time and noted her growing interest in migration. She told of the long hours of night flying of “curlews and plovers and knots, of sandpipers and turnstones and yellowlegs,” their cries drifting down from the night skies. And as she continued to write, Carson found others along the way as inspired by birds as she was. One such woman was Ada Govan, an amateur ornithologist who’d already established a bird sanctuary in Massachusetts. Tow path along the C&O canal (MD) where Carson reportedly often walked with Shirley Briggs spotting birds. I walked a section of this path with Carson’s biographer, Linda Lear.

Govan’s long-time observations of birds, along with rescuing and banding them, had come about after suffering intense personal tragedy, including the loss of two infant children. She kept meticulous records and found fulfillment in noting the return of several of her banded birds, carefully describing age and plumage from year to year. She noted on July 4, 1938, “Adult, beautiful and savage. July 4th, just the date to band him on… The only grosbeak I’ve never been able to handle.” Perhaps it was this kind of confession that attracted Carson and kept her friendship with Govan alive through a close long-distance friendship.

In October 1945, Carson and her ornithologist friend and colleague, Shirley Briggs, drove to Hawk Mountain in eastern Pennsylvania, where they endured bitter cold to observe hawks in migration (check out this excellent photo Briggs took of Carson in classic hawkwatch position.) Her short unfinished piece about the event is full of images of birds and the Appalachian highlands below them. “I lie back with half closed eyes and try to realize that I am at the bottom of another ocean—an ocean of air on which the hawks are sailing,” she ended. Even as she wrote of birds, it seems that Rachel Carson loved the ocean and found it, even in the wide open sky over Pennsylvania.