We’ve had a lot of discussion recently on the pros and cons of interfering with ‘nature’ on behalf of an individual animal. But sometimes, when you’re actually confronted with a situation, theory gets all muddled.

I like bats. Always have, even before my goth phase kicked in. So when I spotted a large, handsome Hoary Bat grounded at the side of the path while I walked Muir early one morning, my first thought – after I determined that it was not dead – was “how can I help?” It was half in the gravel and very exposed to the numerous people and dogs who use the trail daily. Leaving it there did not seem like a good option.

A different Hoary Bat, on a better day.

It turns out, helping a bat is hard. Not having a smart phone, I called a friend in New York and had him Google up some wildlife rehabilitators’ numbers, but they were all out of service. A second call netted only Animal Control’s number.

I reluctantly left a message with Animal Control and stood guard, trying to shield the bat from both the increasingly hot sun and any curious dogs who might wander by (Missoulians celebrate the rugged cowboy heritage of the state by pretty much ignoring leash laws.) Muir, thankfully, was not the least interested in the smaller mammal, and only a little confused about why our walk had been interupted. Ants were crawling under the bat, and I tried to reconcile that I was doing the right thing — he wasn’t going to last the day in his current location, and at least getting him picked up by the authorities meant that he wouldn’t slowly bake or result in some unfortunate dog having to go into quarantine — or a small child getting extra shots.

When the clock ticked over to business hours, it occurred to me to call my vet’s office, and they were able to give me the current phone number of a wildlife rehabilitator — but it was too late. Animal Control was on the way.

I have only praise for the woman from Animal Control. She was matter-of-fact about what was going to happen, but she did her best to minimize stress to the bat and quickly verified that neither Muir nor I had touched it. She also told me that it isn’t legal for wildlife rehabilitators in Montana to do anything with bats except turn them straight over for testing anyway, which made me feel like a bit less of a heel.

She also told me that mine wasn’t the only bat they’d dealt with recently. Only a few days before, an entire pile of dead bats, and a few dying ones, turned up on a lawn across campus from where I stood. They were negative for rabies, and were currently being tested for poison exposure. My mind, of course, immediately jumped to White Nose Syndrome (in fact it had jumped there before, and I’d looked as closely at my bat’s face as I dared, but I didn’t really know what I was looking for.) But that is supposedly still well east of us, having only been detected in Missouri this spring. Moreover, it is not really an August disease, but a problem most often seen in hibernation.

The Animal Control officer loaded up the bat and left behind the mystery, and Muir and I walked sadly home.

In a disturbing postscript, I found another bat — this one a Little Brown Bat, and very much dead — on another walk a few days later.

Bat photo courtesy of the Bureau of Land Management 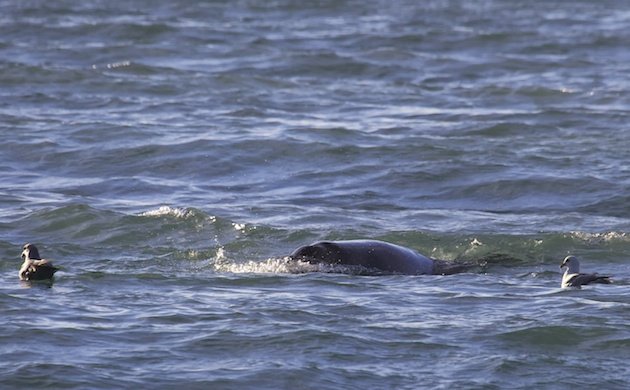