Siren Song of the Seawatch

Throughout history, innumerable adventurers, merchants, rum runners, and real estate moguls have been entranced by the inexorable pull of the sea. The entrancing tidal influence has infected quite a few birders in that time as well. The attraction is not immediately obvious. After all, where are the trees, tall grass, and other trappings of avian life? The truth is that the ocean is teeming with birdlife. To take in the pelagic birds like tubenoses, jaegers, skuas, and alcids, you usually have to cruise out beyond the continental shelf. But if you stake out the right stretch of seashore, you can spot all of those birds and metaphorical boatloads of others. What is a seawatch? It’s nothing more or less than watching birds at sea. 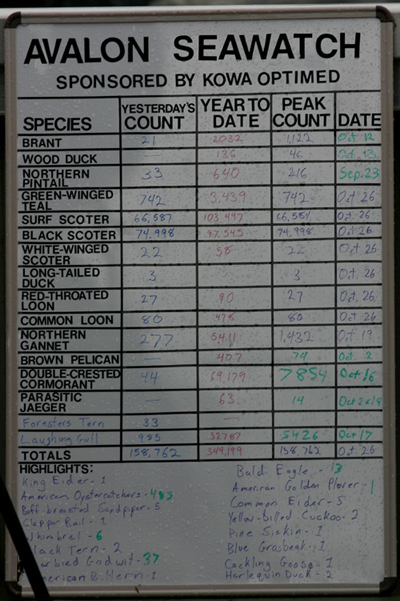 A seawatch can be sited just about anywhere with unimpeded sightlines of coastal waters. Seawatches are usually, as one might expect, stationed along oceans or portions thereof, but some massive inland bodies of water also merit seawatch scrutiny, as the bird list from Michigan’s Whitefish Point off Lake Superior can attest. The most renowned seawatch sites are often located on capes, islands, peninsulas, or other spits of land jutting out into open ocean. For example, it was recently my great pleasure to visit the Cape May coast including the legendary Avalon Seawatch. In fact, counters at Avalon, a hardy breed with indefatigable eyes and tireless thumbs, tallied roughly 158,000 birds just the day before I got there. Record counts like that intimate at least some of the ineffable attraction of seawatching.

What is the thrill of seawatching anyway? The experience can be frigid, gusty, and gray while the birds, when they show up, display neither diversity nor definition. Yet, what species can be found navigating wind and wave out beyond the intertidal zone are exquisite and often rare in terrestrial terms. Sure, cormorants are common enough and loons love lakes but the rest of the lot is more often than not confined to coastal waters.

Many of the specialties of seawatches are seaducks, particularly scoters. Along the Atlantic coast, we expect all three scoter species along with eiders, scaup, Long-tailed, and even Harlequin ducks (Green-winged Teal, on the other hand, is not a bird I’d previously associated with oceanic migration!) Seawatchers also spy plenty of loons, cormorants, geese, and grebes.

Waterfowl are hardly the only seabirds to seek out along the coast. Sleek tern species can be seasonal treats as are gannets, for my money the sexiest seafarers on two wings. Ironically, gulls aren’t usually a great attraction at seawatches; dedicated gullers are as likely to scour garbage dumps as they are to scan shorelines, although larids do love the seaside.

Apart from breathtaking skeins of scoters or vast rafts of mixed seaducks, prize seawatch sightings usually entail pelagic species veering into coastal waters. Alcids like murres and puffins, for example, spend most of their time in distant waters or remote breeding grounds, which makes an errant flight over shallow waters huge news. By the same token, fetching fishmongers like albatrosses, petrels, skuas, jaegers, and shearwaters do most of their business out beyond the continental shelf. The mere possibility of spotting any of these species, even as distant specks, adds spice to seawatches in any season.
Seawatchers seem to represent a specialized, often salt-rimed breed of birder, intrinsically attuned to oceanic avifauna. While you may not be ready to dedicate the sum of your winter weekends to scanning seaduck flocks, you should seek out a seawatch in season. When the time is right, there’s no better way to add pelagic species to your lists without risking seasickness. Furthermore, a thundering migration, when lines of waterfowl stretch from one horizon to the next, matches the grandeur of just about other of nature’s clockwork movements. If that’s not enough, there’s always the possibility of a cetacean sighting… perhaps petrels aren’t universally admired but everyone loves a dolphin!