Social Media for Bird Bloggers – What is Just Right?

As a bird blogger in these days of the social-media-heavy internet it is important to properly calibrate your blog’s social media presence. Too little material appearing on Facebook, Twitter, and Google + and your blog is likely to not get the attention it rightfully deserves.  Too many links posted all over the place and your readers and potential readers might get “click fatigue” and stop responding to your calls for a visit. How is a bird blogger to figure out how much social media is just right?

Before I continue I should point out that I am not an expert at anything, least of all social media. The fact that 10,000 Birds draws the traffic it does must be some kind of cosmic error that will some day be rectified.  So take everything that I say here in this blog post with a grain – nay, an entire shaker – of salt.  This post isn’t a claimed expert speaking from on high but more of an attempt to explain 10,000 Birds’ social media strategy, such as it is, and a jumping off point for what will hopefully be an insightful discussion in the comments.

First of all, if you have a blog and are actively seeking readers you should definitely have a Facebook page for the blog, a Twitter account that you use to share your blog feed, and a Google + account which you use to reach the “too cool for Facebook” crowd. This is the bare minimum social media presence you will need to reach the maximum number of readers.  There are, of course, a host of other options available where you can push your content but StumbleUpon, Reddit, and Tumblr all seem a bit difficult to use to regularly recruit readers and the first two seem to frown upon users who use them simply to publicize their own content.  Tumblr seems like it would be an ideal way to have a secondary blog feed a primary blog but Mike’s experiment with the format did not work terribly well in terms of driving traffic to 10,000 Birds.  Maybe Tumblr is best used to quickly spread memes but not as a traffic-driver for the typical bird blog?

Once you have your social media accounts set up how do you get people to follow or like your blog’s social media presence? Facebook and Twitter make it rather easy to get the code to install a “like” or “follow” widget directly into your sidebar. You can use your personal accounts on any social media to direct attention to your blog’s accounts. You can also make direct appeals in the form of blog posts. If there is some kind of content you can offer your readers on one of the social networking sites that you don’t offer on the blog that might entice folks to make the jump to your social media profiles.

Here at 10,000 Birds we really don’t do much with Twitter beyond our 10,000 Birds account broadcasting our feed. More adept Twitter users build huge audiences and seemingly can drive significant traffic.  We get a slow but steady trickle from

Twitter, mostly people, it seems, who get the lion’s share of their content via that medium. We don’t retweet others, we don’t get involved in Twitter conversations, and we don’t think we are missing too much. Feel free to correct me if I am missing something but I have yet to see a Twitter account really bring a bird blog into the limelight – in fact, some of the biggest Twitter users in the bird blogging world with lots of followers don’t seem to pick up much traffic for their blog from Twitter at all.

Google + is another medium that we rarely exploit.  Some individual Beat Writers use Google +

regularly but it seems that Google’s answer to Facebook has yet to reach the place where it is absolutely necessary for a blogger to use it (ignoring what I wrote in the first paragraph of this piece). It can’t hurt but it doesn’t seem to add much traffic.  That said, it seems a poor bet to gamble against Google. It seems wise to at least start a Google + account and occasionally feed it with some of your blog content. Maybe Facebook will collapse in a fit of insanity from Mark Zuckerberg and Google + will be there to pick up the pieces.

Facebook is the online place where a bird blogger must be. 10,000 Birds gets lots of visits both from our dedicated Facebook page and from others sharing our posts on their personal accounts. Our feed automatically goes to our Facebook page though we learned that with the recent Facebook redesign a lot of those posts were being missed so we now often repost them to the page manually. It helps to give a person a reason to click through, however, as a link  presented without comment will often fail to move people to click.  A call to action, a question, or a snide remark will often draw people to click through to even the most uninspiring of posts. (Not that we ever have any of those here!)

The trap to avoid is putting your posts out there too much.  When someone is friends with you on Facebook and a fan of your blog and a member of several Facebook groups dedicated to birding and they see your posts in every single spot they will rapidly grow tired of seeing the same post everywhere, especially when they get notifications whenever you post something to a group you both belong too.  While we would like to believe that the online birding world is huge the fact is that there is a finite number of birders using social media and most groups have overlapping memberships. Once your blog is out there there is no reason to keep beating people over the head with it. If they want to follow your blog they will.  If they don’t they won’t. Exceptions include posts directly relevant to a group.  Examples? A post on a specific digiscoping method would be a good thing to post in the digiscoping group, an interview with a leader of an organization would be a good thing to post on that organization’s page, and a post on a topic your friend is interested in is a good thing to post on their personal page. But continuously posting irrelevant or repetitive material to every birding group or page will only make people frustrated with you and likely to tune you out.

Also, make sure to make it easy for readers to share your content from their social media profiles.  Widgets are easy to find and download and readers organically liking your material will always be a more powerful and authentic way to grow your audience. You saying that your material is great is easy to ignore but when people with no vested interest in promoting your blog say it should be read then you can bet people will listen!

I hope that this post is at least a bit helpful and I would really like to hear what people have to say in the comments, especially those who are more into Twitter, Google +, or other social media tools.  What is your social media strategy? 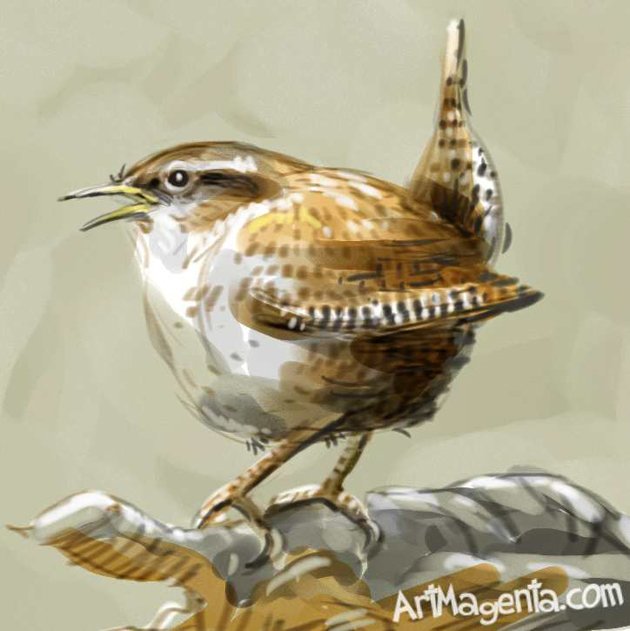 Bird of the Day by ArtMagenta

I and the Bird is Back!