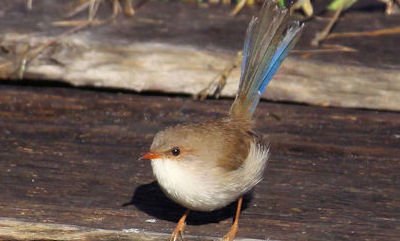 The vast majority of the 10,000+ living species of birds are passerines, and the vast majority of those have a similar system of breeding: Mom and dad bird make a nest and share parental responsibilities roughly equally, if not identically. There are variations on that theme, of course. Even the non-passerines often follow this pattern. So, when we find a pattern that is different it is reasonable to try to explain this in adaptive terms; what features of this variant pattern provide enhanced fitness, and what ecological or social factors underly it?

There are two patterns that are fairly extreme that fall into this category: brood parasitism and helper-at-the-nest strategy. In the former, a female lays her fertilized egg in the nest of another species, in the hopes that her offspring will be raised by the unwitting hosts. In the latter, three or more adult individuals contribute to the raising of offspring. In the case of brood parasitism, made famous by the many species of cuckoo as well as cowbirds and some finches, among others, one might expect the host birds to evolve anti-parasitism strategies. In the case of helpers-at-the-nest one might expect that this strategy arose because of certain ecological or social conditions. It turns out that the two strategies may be related. Brood parasites might target helper-at-the-nest species because the latter are so darn good at raising offspring under certain conditions. Or, helping-at-the-nest might be a good strategy to avoid parasitism.

A recent paper in Science, Brood Parasitism and the Evolution of Cooperative Breeding in Birds by Feeney, Medina, Somveille, et al, looks into this interesting possible relationship. After a review of the literature on the global distribution of these strategies, the authors determined that there is a geographical association between them. Brood parasitism and helping-at-the-nest co-occur, though not perfectly, globally. This map shows the association in space: On considering the possible relationships between these strategies, the authors then develop the following three hypotheses:

On first glance, that second hypothesis strikes me as not a very good one. This is the sort of idea we often see in behavioral ecology. Birds (or other animals) need to be whacked on the head with some over the top obvious signal of something important or they won’t notice it. This was the idea originally proposed to explain unbelievably huge sexual swellings in primates, to let males know who the females are. Personally I think that some really important information, like which other animals are members of your species, or members of the opposite sex, or where the nests of your potential prey are located, will be detectable because selection for being able to detect these things is strong.

The key issue here is this: Does helping-at-the-nest arise as a strategy, at least in some cases, to avoid brood parasitism, or rather is it the case that brood parasitism is often targeted at helper species because it is potentially more effective, or perhaps, do the two strategies co-develop because of reciprocal benefits?

The authors tested the idea that brood parisites benefit, in terms of fitness, by targeting species with the helper-at-the-nest strategy. They looked at fairy-wrens and cuckoos.

Cuckoo chicks grew slightly faster when reared by groups of three or more … The chance of surviving to fledge was also greater for nestlings reared by larger groups, because predation rates decreased with increasing group size … Although superb fairy-wrens commonly reject cuckoo chicks the incidence of chick rejection was not correlated with group size. Overall, then, [w]e find that brood parasites can gain a fitness advantage for their offspring by associating with cooperative breeders, because they offer superior provisioning and a more effective defense against predators.

Hypothesis 1 was not rejected, and support for the idea that “brood parasites might selectively target cooperative breeders to maximize the care of their offspring.” However, the frequency with which this strategy actually worked, despite its benefits when it does work, was low. Larger groups of helping birds were parasitized less frequently than smaller groups, at two different study sites.

Also, the second hypothesis was not supported, because cuckoos were not attracted to helpers based on their visibility.

The third hypothesis was supported.

…because cooperative breeding facilitates defense against brood parasites. We quantified the fitness advantage associated with better defenses against parasitism in large groups using data from [one of the study sites]. Relative to small groups, the reduced probability of parasitism in large groups increases the production of young by 0.2 fledglings per group per season. Therefore, both parents and related helpers gain a fitness advantage from cooperative breeding when interacting with brood parasites.

Larger groups were able to avoid being parasitized more frequently than smaller groups. In fact, helper-at-the-nest groups were more responsive to cuckoos than to significant predators such as predatory birds and snakes, when exposed to models of those entities. Apparently, fairy-wrens have a number of alarm calls and may have a special alarm call just for nest parasites, and “…this call elicits a more rapid approach by group members than mobbing alarm calls or a control sound…”

Photo of a fairy-wren from HERE.