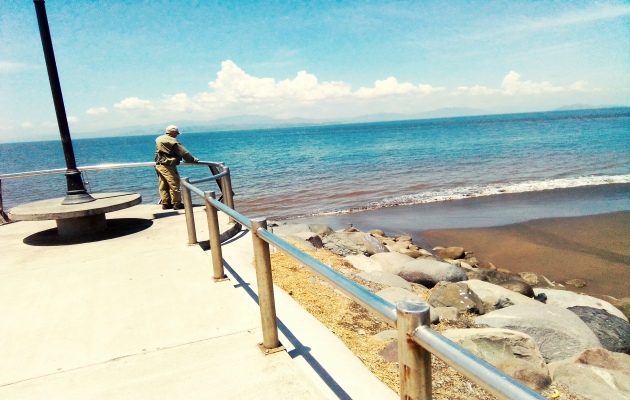 The birding in Costa Rica is always golden but some days, you really do strike gold. Go birding in the humid, moss decorated forests of the Caribbean slope and the feathered nugget might take the form of a Bare-necked Umbrellabird. Focus on birds in the southern Pacific region and treasure might be a Turquoise Cotinga. In the highlands, gold can come much easier with views of Resplendent Quetzal, one mega bird that truly lives up to its name.

As with any patch, wildlife refuge or other birding locale, that birding gold can also be minted in the form of a rare and unexpected vagrant. When such a bird has “gold” or “golden” as part if its name, then I suppose seeing it is a literal birding equivalent of striking gold. Last week in Costa Rica, I had the great fortune of finding some of that avian treasure, on this occasion, a Pacific Golden-Plover in the small coastal city of Puntarenas.

When not loafing by the fish shops, the gull sometimes takes sun on a nearby roof, even perching on the roof of the ferry that crosses the Gulf of Nicoya. With this birding knowledge in mind, we made a few passes by the shops, checked as many boats as we could and scanned rooftops. Alas, our Western Gull was nowhere to be found! In all likelihood, it had surely esconded itself in some inaccessible nook where it could feast on fish parts.

While pondering how we could get more views into those fish shops and wondering if we could a better angle for scanning the flat roofs of Puntarenas, a bird casually flew just past us, right on the shore near the busy ferry. Perhaps because of the common urge to settle on the default bird, even though I noted that the bird had rather yellowish upperparts, I said, “Well, that was probably a Black-bellied (aka Grey Plover in European birding lingo) but we better go check that bird out.

Lucky for us, “that bird” perched on a rocky promontary and allowed us to get steadily closer and closer for increasingly better looks and digiscoped shots. As we hoped for it to call, the realization that it wasn’t just an American Golden-Plover but quite possibly a vagrant Pacific Golden-Plover became evident. Large bill, more overall yellowish than an American, and yep, those blue-gray legs look pretty long. The bird was fitting the bill!

Most of all, it gave us enough studies of the wings to see that the tertials went pretty far down the tail and that the primaries didn’t seem to project as much as an American. Thanks to modern technology and the bird being so wonderfully compliant, I was able to digicope and send the pictures to a couple of friends for their opinions. Robert Dean, artist and co-author of The Birds of Costa Rica responded right away saying that yes, with that large bill, he thought it must be a Pacific. Shortly after, Julian Hough, another highly experienced birder and expert on shorebird identification, responded and explained why the bird was, without a doubt, a Pacific Golden-Plover.

At that point, I started getting the word out while continuing to study our unexpected avian gold. Whether because it was a tired migrant (likely) or because it was just naturally tame, eventually, we had to leave it to go look for other birds! Thankfully, the lost plover stayed for several days and was seen by many local and some visiting birders in the same spot.

This sighting was one of three or four confirmed records for mainland Costa Rica (and three from Cocos Island) and was very much unexpected but given the similarity to American Golden-Plover, I have often wondered if Pacific occurs more regularly than we think. Not that it one could expect to see one in Costa Rica but could the species be annual? Might a few occur appear in Costa Rica during migration? In checking eBird images of possible Pacific and American Golden-Plovers, I found several possible records for Costa Rica, Nicaragua and Belize from the months of November to April. It will be interesting to see if the growing number of birders with cameras in Costa Rica will result in more Pacific Golden-Plovers being found in this birdy nation.

As for the Western Gull on permanent vacation in Costa Rica, Paul and I will have to return and look for it another day. I won’t be expecting any birding gold the next time we visit Puntarenas but given the site’s penchant to attract lost feathered treasure, I’ll be sure to carefully check each and every bird!