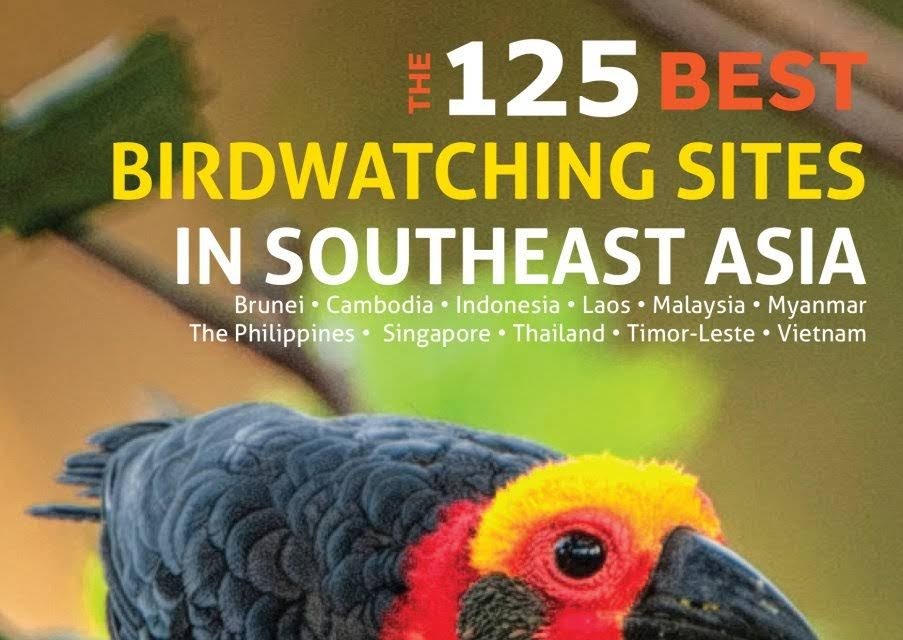 Having more than 2500 bird species, including over 850 endemics (480 in Indonesia alone), Southeast Asia stretches roughly from the easternmost Himalayan slopes in Myanmar and the palm-fringed beached of Thailand all the way to the ridiculously colourful Birds of Paradise of New Guinea, which Phoebe Snetsinger described: “I’ve never done acid, but I imagine that when you do, you see things like the birds-of-paradise.” In between lies the Malaysian province of Sabah – the birdiest part of Borneo. That is about it – I do not know much more about this region. 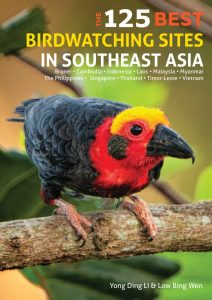 And now I am holding the “The 125 Best Bird Watching Sites in Southeast Asia” – an expanded and fully updated second edition of “The 100 Best Birdwatching Sites in Southeast Asia”. As a rule, I like second editions better. Whatever was omitted or incorrect in the first is fixed in the second. This guide describes the 125 best birding sites for both common and rare species, covering Myanmar, Thailand, Laos (officially Lao PDR), Cambodia, Vietnam, Malaysia, Singapore, Brunei, Indonesia, the Philippines and Timor Leste.

The introductory chapters occupy the first 46 pages and cover topics ranging from climate, geography, habitats to bird migrations and conservation issues. The next 336 pages are devoted to reserve guides (pity, the reserves are not covered in the Contents, only the countries are). The book ends with Recommended reading (mostly bird and wildlife watching guides per countries), e-mails of local birding organisations and bird tour agencies, short bio of more than 40 contributing authors (experts on their areas), Index of all the birds mentioned and the tables with number of endemic species per major islands and larger archipelagos.

In the main section, Birdwatching Countries of Southeast Asia, each set of hotspots starts with a two to three-page country intro focusing on climate, access & transportation, health & safety, and the birdwatching highlights; including a basic map showing the main cities, the river systems and the birding hotspots. Next is a box with the key facts: the number of endemics, the total number of birds per country and the top-5 (to 10) bird specialties. 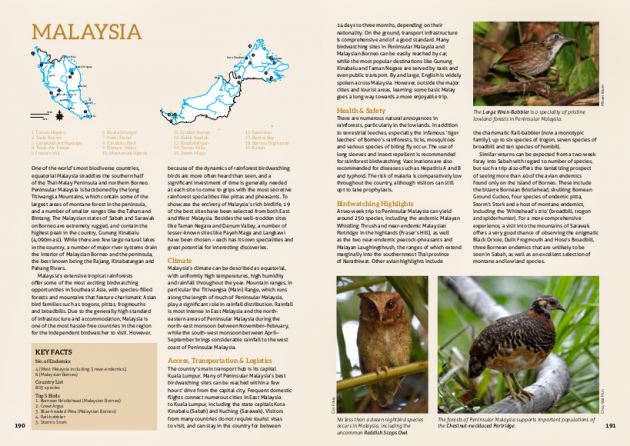 The individual reserve guides follow, starting with a very basic map with reserve boundaries, main villages/towns and roads, next to a key fact box underlying the nearest towns, local habitats, the key lowland, montane and winter species, other specialties and the best time to visit. The reserve guides are further divided into specific Birdwatching Sites, Access & Accommodation, and Conservation. Detailed descriptions of each site cover the type of terrain and specific spots at which certain species are likely to be found. 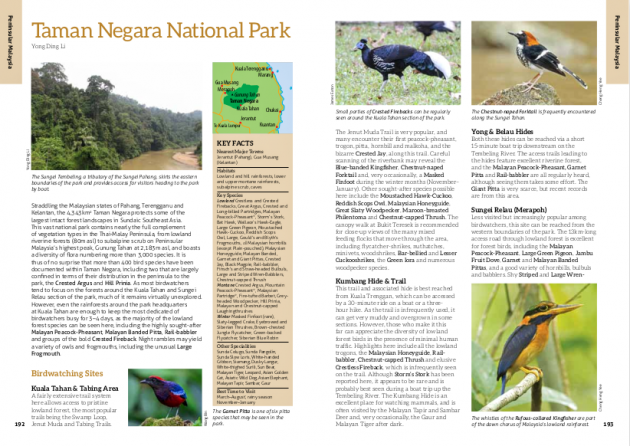 Yong Ding Li is the vice-chair of the Southeast Asian Biodiversity Society and a committee member of the Nature Society (Singapore)’s bird group. Low Bing Wen is a terrestrial ecologist and a keen birdwatcher with more than 20 years of field experience in Southeast Asia, India, China and Australasia.

“The 125 Best Bird Watching Sites in Southeast Asia” has 404 densely packed pages (109 of them on Indonesia alone) with 136 simplified maps and 1000 photos of mostly birds, but also habitats. The format is 210 x 148 mm (8¼ x 6”). It weighs 840 g and since an average traveler is likely to visit just one country per trip, beside some that will scan the pages they need, many more will rather cut the 28 mm wide spine of the book to carry only the relevant chapter with them.

And the first impression: impressive indeed. I don’t think it is possible to pack more in a single volume, without turning it into a coffee table book. I like the concept of this guide, covering the most important reserves in each country and offering travelling birders a lot of important and not so easy to find birding info, plus the basic info on infrastructure, allowing them to google further.

Local contributors are the real gem of this edition. I remember one occasion, quarter of a century ago, when as a still young and very active/strictly local birder, I entered the office of a Natural History Museum’s Director to donate a polecat cadaver that I recovered from a dog while I was birding earlier that morning. He had another guest already and introduced me as “the best expert on…” (that is when all the lights in my head went on: expert? me? expert on what??) “…this area and its birds.” And that is what the numerous local contributors are: the very best experts on their areas.