After being chased out of Jones Beach by swarms of pernicious mosquitoes, Corey and I headed inland to observe arboreal avifauna. Sure, rain threatened and earlier attempts to spot songbirds were average at best, but if you’re not going to chase warblers on a Saturday afternoon in New York in the middle of May, when are you going to?

The most convenient site turned out to be Valley Stream State Park, a new locale for both of us. Reports of an errant Golden-winged Warbler put this park on the NYC birding radar for a while, but overall, Valley Stream gets little attention compared to sites like Central Park and Jamaica Bay. Initially, we could see why. Moving along a small stream, we had little more than local breeders like Baltimore Orioles, Blue-gray Gnatcatchers, Common Grackles, Yellow Warblers, and both Warbling and Red-eyed Vireos to contend with. One Magnolia Warbler at the edge of the wood and Wood Thrush and White-eyed Vireo within it were the highlights of an uninspired span of birding. It seemed as if the usual spring torrent of songbirds was more of a trickle.

Just when we were about to give up on Valley Stream State Park, we had a fortuitous encounter with a fellow birder by the name of Bobby. I describe this meeting as fortuitous because Bobby happens to be quite possibly the most knowledgeable authority anywhere on the avifauna of Valley Stream. He’s the upstanding citizen who reported the golden-wing along with any other interesting bird that’s passed through Valley Stream in the last twenty years or so. Not only that, he gave me and Corey the deluxe tour, leading us to areas as rich with passerines as any I’ve ever had the privilege to enjoy. This was it… spring had finally sprung!

In a broad wood of tall oaks, we tallied a plethora of warbler species. The expected Yellow, Yellow-rumped, Black and White, Black-throated Blue, Common Yellowthroat, American Redstart, and Northern Parula were there, as were Black-throated Green, a common species that has been inexplicably scarce. More exciting species included Prairie and Ovenbird. The real show-stoppers, however, were Blackburnian and Cape May, both males in peak plumage. Believe it or not, I’d never seen a Blackburnian Warbler before. This was actually the second firethroat sighting of the afternoon, but while Bobby and Corey got on it, I alas could not. Thankfully, I was able to leave this park having seen in the flesh one of the most exquisite wood-warblers in North America. Brilliant! It should go without saying that Corey felt the same way about his life Cape May, coincidentally my first in the ABA region.

Thanks to Bobby’s generosity and expertise, the afternoon turned out to be a perfect slice of migration heaven. Warblers were the stars of the show, as expected this time of year, but birds like Veery and Scarlet Tanager (male and female) added to the excitement. One of the most memorable sightings, surprisingly enough, was Yellow-crowned Night Heron, unexpected in a woodland setting like this. Two yellow-crown nests were situated high in the canopy, at least 30 feet up. One of the nests was uninhabited, at least for the moment, but the other hosted two wary herons, one sitting on the nest and the other glaring balefully down at us, golden crown ablaze. While Yellow-crowned Night Herons are always impressive to see, this angle heightened the drama considerably. 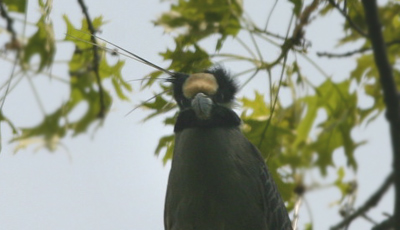 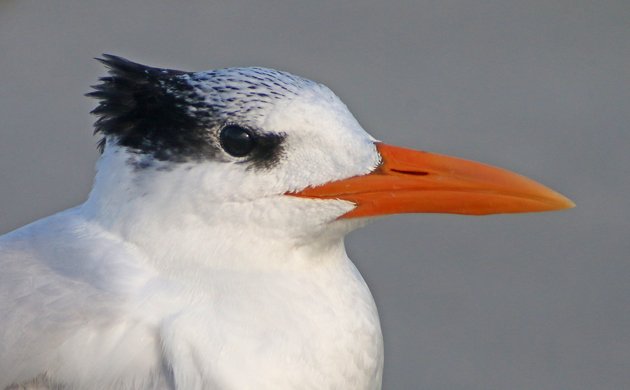