Where Did This Cooper’s Hawk Come From?

I had a completely different post planned and tossed it out the window this morning over my coffee as I watched the birds out my window.  I have an especially interesting bird in my hipster Minneapolis neighborhood, a Cooper’s Hawk.  A Cooper’s hawk in and of itself may not be the most exciting bird on the planet as it is a very common urban hawk, but this particular bird offers a mystery for me to chew on. Yesterday while catching up on work after an amazing vacation at the Rio Grande Valley Bird Festival, I heard my local American Crows going bonkers.  I looked out the window and found the above hatch year Cooper’s Hawk chowing down on a pigeon in the alley. I set up my spotting scope on the raptor and noted with delight that the bird was banded. I knew it was a long shot with the storm windows in place to get a clear photo of the band numbers, but I tried to digiscope it anyway. I didn’t want risk opening the storm window and startling the bird off of its meal. It’s hard enough to navigate your first year of survival as an accipiter, I felt the bird’s refueling trumped my need to know the band number.

I was intrigued by who could have placed that band on the hawk. I know who the bird banders are in the Twin Cities metro area–no one is banding Cooper’s hawks.  However, about 150 miles north of my home is Duluth, MN where I know a few hawk banders including the folks at Hawk Ridge, Frank Taylor and Frank Nicolletti (aka hawk counter extraordinaire) band hawks in the fall. I think chances are good that this bird was banded in Duluth which led me to rethink my winter Cooper’s hawk observations. They are very common in my neighborhood and I have always assumed the brown hatch year birds I see in the winter are resident birds hatched in my ‘hood. This banded Cooper’s would suggest otherwise.

I posted a photo of the hawk with the band on Facebook and tagged all of the Minnesota hawk banders I know. Surprisingly, Frank Taylor said that he did not get a hatch year Cooper’s hawk at his banding station this season, so we know the bird wasn’t banded by him…interesting.

The hawk ate some of the pigeon and then flew up with the remainder to a high branch to finish its meal in a less vulnerable area.  I noted with delight that the feathers and bones landed on the stoop of a rather noisy neighbor and mentally thanked the hawk for leaving a bloody, feathery mess and a large fecal deposit for them.  Heh. This morning, I heard the crows harassing something again.  I sipped my shade-grown coffee and watched as six crows lined up and surrounded the above grey squirrel who was eating some chicken it discovered in our dumpster. The crows were inching closer and periodically displaced when the squirrel would charge them.  I watched this routine three times when all of a sudden: BAM! The Cooper’s Hawk flew into the middle of the scene, sending squirrel and chicken straight up the trunk like a rocket and scattering crows like spilled marbles. The raptor didn’t appear to have a serious hunting plan. Accipiters like Cooper’s hawks tend to act before they think, they are very reactive to movement and I’m certain the crow/squirrel game had the bird’s attention. She landed about twenty feet from my window and I set up my scope.  I love this look on her face!  Her eyes followed the crows as they bounced around the branches surrounding her. It’s that excited hawk look that seems to say, “Wow! Can I eat that?”

She was so focused on the crows, that I was able to get the storm window open to try for a better photo without scaring her off. Of course, as soon as I got the scope on her, she tucked her banded foot up into her feathers (which generally means the bird is relaxed and I usually take it as a compliment from birds–I’m not disturbing them).  But that meant there was no way to get read on her band numbers.  The photos probably would have been just as unreadable, the heat from my apartment was escaping out of my window and made for some wicked heat shimmer and impossible focusing conditions! It was interesting to note that the crows were not on full alarm with the hawk. Their calls the day before were much more agitated, but that could have been because of the dead pigeon. They certainly did not mob this hawk as hard as they do when a larger hawk or owl is in the neighborhood. Even when the Cooper’s would chase one of the crows, they seemed to know that it wasn’t a serious chase, or at least there was no way that hawk would be able to catch them.  Some crows continued to forage the dumpsters while a small group remained in the trees and kept an eye on the hawk.

I’ll be curious to see how long this hawk hangs out in my neighborhood.  I’ve put extra feed in my bird feeders to attract potential food for her.  I even scattered extra seed on the ground and ledge to get the pigeons’ attention. We’ll see if we can’t get a read on her band numbers yet.

It just goes to show that even a common yard bird can offer a new perspective when birding at home. 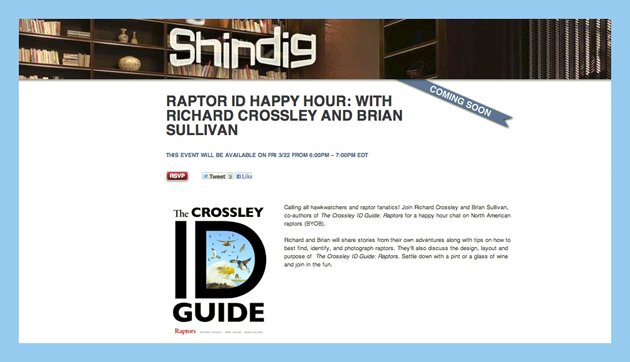