A Hawk in the Woods 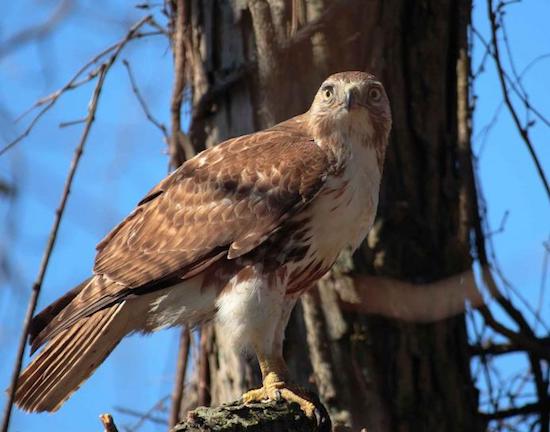 Well what’s the big deal, you might ask? I see those all the time. But you’ve never seen one like this before, because A Hawk in the Woods is the title of my debut novel, coming this February from Word Horde.

The hawk in question is a Red-tailed Hawk – not a species strongly associated with myth or horror, like the Raven, and not a rare or spectacular or symbolic species, like the Gyrfalcon. So why did I choose it to not only play a major role in my first book-length work of fiction but make it, effectively, the title character?

Precisely because it is common, universal, and omnipresent. As I noted long ago, there are very few places in North America where you can go outside and be completely confident that you won’t encounter a Red-tailed Hawk – so what does that mean when, for supernatural and very personal reasons, you desperately want to avoid just such an encounter? It means drama. It means plot complications. It takes something common and ordinary and turns it into a source of tension. That’s better than spooky Ravens any day (no offense to Ravens.)

Round Up Round Up

The Best Birder In The World Comes to 10,000 Birds

« Previous post
Shorebirding in Costa Rica
Next post »
Where Are You Birding This Final Weekend of September 2018?