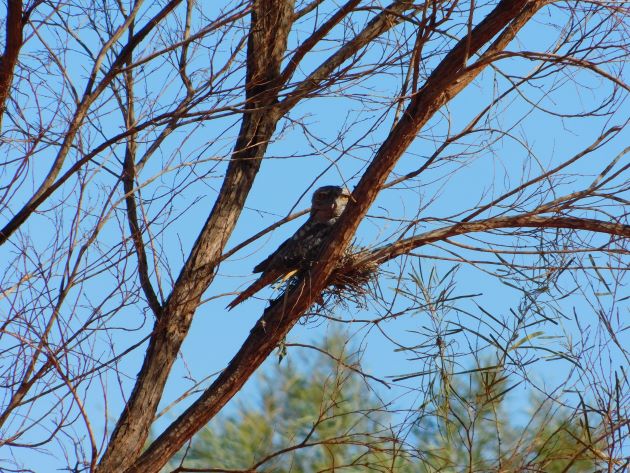 Last Sunday we were driving down a gravel road, which is mostly the local red sand known as pindan, when Grant said “we’re going back for that”! The edges of the road are high where they grade it every now and then to keep it less rough-I won’t say smooth! We soon did a three point turn and slowly went back. It was soon obvious that one of the trees right on the edge of the road was not empty and we pulled up just before it. Using our vehicle as a bird hide I was able to take a few photos of the tree’s resident bird. The photo above is the first photo that I took and the one below is the occupied tree.

This Tawny Frogmouth nest appears to be using the least number of sticks possible. We keep hearing about construction costs going up, but it shouldn’t make any difference if you are a Tawny Frogmouth! We carefully moved forward and beyond the nest taking a few photos from different angles. The Tawny Frogmouth did what they do best and just blended in with the tree.

It isn’t far from home to go back in coming weeks and see how big the family of Tawny Frogmouths will be. I hope to be able to update you in the future.

Reason To Become a Bird Watcher #3: No Regrets!

Are You Going to the New York Birders Conference?

How to Beat Warbler Neck

« Previous post
I Have Been Remiss
Next post »
Thoughts on Redstarts, an Early Fall Migrant in Costa Rica, 2022