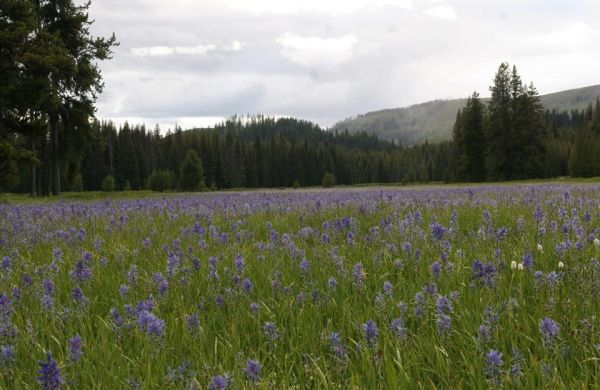 Highway 12, as it takes you from Montana into Idaho, has been the road to some of my greatest adventures during my time here. It takes you to hot springs and the old-timey resorts that still linger around them; it takes you to wildfire-swept spots along the banks of the Lochsa River where I heard foragers with decades of experience exclaim “This is legendary” as they looked out over the fist-sized morels sprung up around blackened stumps; it takes you to the late lamented Lumberjack, where you could drink all night secure in the knowledge that a cabin waited for you just steps outside, so no need for a designated driver.

It also, if you turn off at the visitor’s center just over the Idaho border, takes you to Packer Meadow, a high damp sunlit clearing of some fifty acres, cut by a winding creek. Though the name Packer is derived from some guy who built a cabin nearby*, Lewis and Clark called it the Quamash Meadow, and my friends here in Missoula refer to it as “the camas fields” to this day.

It seems more appropriate. The camas, or quamash, was there long before the cabin, and is still here today when Packer, whoever he was, is long gone. Every June this meadow flushes blue with the blooms of Camassia quamash, a small blue perennial flower that not only beautifies the landscape but enriches it. After the bloom is over, the bulbs below-ground are swollen with stored starches and sugars, and Native Americans in the plant’s range would harvest them as a key source of food. They can be boiled or roasted like potatoes, and they can also be pounded into a flour. Little wonder, then, that the destruction of camas fields was, like the destruction of buffalo herds, an act of economic terrorism that the native people deeply resented — the persistence of settlers in plowing up treaty-protected camas grounds was one of the triggering factors in the Nez Perce war, and indeed Chief Joseph and his troops retreated via Lolo Pass just before the Battle of Big Hole. That was then. Today, the camas fields rest protected in the vast bosom of the Clearwater National Forest. Depending on a visitor’s luck, one can see moose and wolves, hear Boreal Owls or Townsend’s Warblers. But the camas themselves require no luck, only timing. They will meet you when you come — so long as you come during the right few weeks in June.

It just so happens that my birthday falls in that magic window, and my good friend James decided to take me out for cake, beer, and camas-viewing. The cake (actually brownies) came from The Candy Barn in Florence, and the beer from Wildwood Brewing in Stevensville, both stops that were not available for the comfort of Lewis and Clark or Chief Joseph. Then we drove up into the mountains.

Highway 12 is designated “Wild and Scenic” for the very simple reason that it is. And Road # 373, the gravel trail that leads away from the visitor’s center and into the woods, is even wilder and more scenic. Along this journey from pass to valley and back again, we spotted Wild Turkey and Western Wood Pee-wee, Ravens and Red-tailed Hawks, mule deer and elk, even the white-striped tail of a Dark-eyed Junco disappearing into the shadow of the trees. But the highlight, of course, was the camas fields.

There were few places not marked by the camas, except the creek itself and a few small glacial boulders that rose up from the ground like old gray turtles. It was thinner here and thicker there, creating a striped effect, but everywhere was violet-blue that harmonized beautifully with the green-black of the forests beyond and the lighter blue of the sky. Mosquitoes buzzed all around me and I nearly didn’t mind, because these flowers, whether viewed en masse or examined individually, were so striking that I couldn’t really think about my skin.

Then, I spotted a slender head rising from a big bird’s body. The crane was alone, a solitary spot of rust-red and gray in this sea of blue and green, and it walked across the edge of the meadow just far enough away for me to be grateful to my binoculars. And then, just when we were beginning to focus on the flowers again, it rose and trumpeted, flying away low across the blooms. For a moment, with my back to the road, I thought I could catch a glimpse of what might have been long ago, and how crucial it was that some small part of it had been saved.

*all I know about said guy is that he was not, sadly, Alferd Packer.

« Previous post
Birding Iceland on the Fly
Next post »
Where Are You Birding This Final Weekend of June 2013?