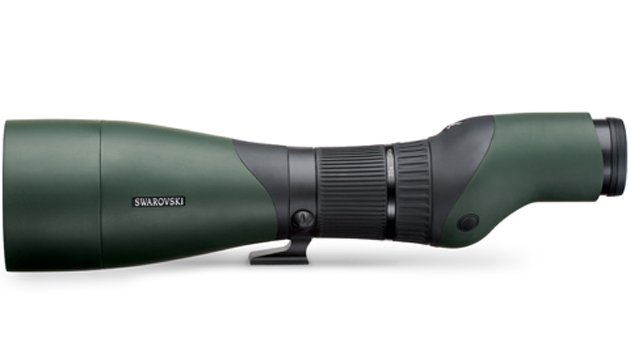 Swarovski Optik has proven their generosity to bird bloggers once again by thoughtfully allowing me the use of one of their marvelous new modular spotting scopes, the STX 30-70 X 95. (You can read all about my first exposure to them in this review.) Unfortunately, the arrival of the behemoth that is a scope with a 95 mm objective lens was timed rather poorly, coming as it did just before the blizzard hit the east coast. Happily, I managed some time out and about looking for birds on Sunday morning and decided that Jones Beach would be just the place to find some subjects, willing or not, on which to practice digiscoping with my new rig.

And, yes, my choice of locations worked out just fine. Wherever the wind or errant snow plows had exposed anything but snow there were birds. Mostly what was around was sparrows but there were a host of Yellow-rumped Warblers, a couple of flocks of Snow Buntings, lots of Horned Larks, and a variety of other species in smaller numbers.

I spent a whole bunch of time on the bare lawn by the gazebo near the Coast Guard Station trying to snap decent shots of Snow Buntings and Horned Larks. Flocks of both species would fly in, forage for anywhere from five seconds to a couple of minutes, and then take off again, sometimes to circle around and land some distance from where they started and sometimes to go forage elsewhere. It was kind of maddening trying to get decent images of birds that wouldn’t stay put. But by staying put myself and taking opportunities when they presented themselves I think I did alright. Also nice was the single Lapland Longspur that has been slumming with Horned Larks all winter long. But the best bird of the morning was a total surprise. I had driven from the Coast Guard Station to West End 2 and was pleased to see that the snowplow had completely lost the road for a bit on the westernmost turnaround. The dug up dirt and grass that had been scraped clear of snow was crawling with birds and I parked my car and walked back there hoping to get some decent shots of one of the Ipswich Sparrows, the pale subspecies of Savannah Sparrow, that I had seen feeding there.

While I was busy digiscoping the Ipswich Sparrow I had another bird go through my viewfinder. All I really caught was an impression of a strong eye ring and some yellow coloration. I quickly took my eye out of the camera and put my bins on the bird. A Grasshopper Sparrow? In February? In New York? I really tried to make the bird something else but it stubbornly remained a Grasshopper Sparrow. Bizarre. The bird was very site faithful and kept returning every time a passing car flushed it. A bunch of other birders got to see this seasonal rarity which made me pretty happy (and hopefully made up some small bit for the suppression of an earlier Ammodramus sparrow).

More searching of the West End of Jones Beach State Park didn’t turn up anything else fantastic but I did have a pretty fun time digiscoping and look forward to many more fun times digiscoping with what must be the best digiscoping rig out right now.