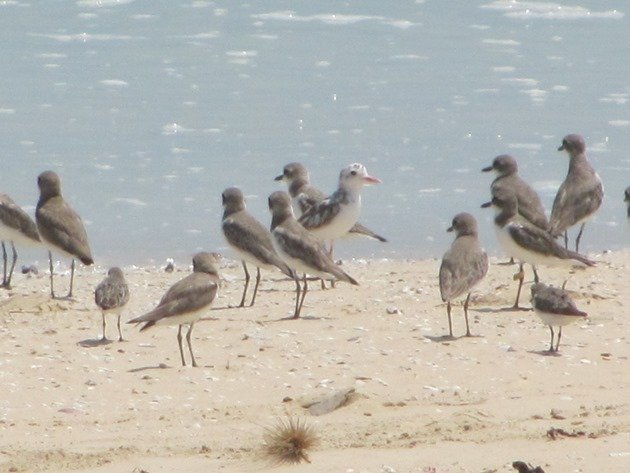 Over the past few weeks we have observed a large increase in the number of migratory shorebirds around Broome and the first few weeks of September brought the arrival of the first of the Oriental Plover and Little Curlew. We have had a very poor breeding season for our resident shorebirds and in particular none of the 16 pairs of Pied Oystercatchers along the 23 kilometre/14 miles stretch of coast that we keep an eye on have successfully bred. There’s been both egg and chick predation and most pairs have laid at least two clutches of eggs over the past few months. We have continued to walk the beaches and watch the arrival of more and more migratory shorebirds and anxiously awaited the return of the Greater Sand Plover “LBR” that we first noted late last year with abnormal plumage. This particular bird had previously had normal plumage and normal leg and bill colour, so it was rather odd to see it change after several years looking exactly like all of the other Greater Sand Plovers in Broome. Between mid-November last year and late December it completely changed plumage and leg and bill colour. It still looked very healthy, but was being shunned by other shorebirds and was often on the edge of any flock. Normally owning only a pocket sized camera can be problematic when trying to photograph an individual shorebird, but Greater Sand Plover “LBR” stood out on the edge of the flock and I was able to capture the changes over the next few months. By March Greater Sand Plover “LBR” had a small amount of breeding plumage present across the breast area, but continued to stand out from all the other shorebirds on the beach and we last saw it on March 30th on Cable Beach. All of the migratory shorebirds had started to leave Broome and it appeared it had also gone north. We had posted the oddity on the Shorebird Resighting Information of East Asian-Australasian Flyway website in the hope that somebody may see this odd looking Greater Sand Plover on migration, but he remained incognito for almost six months.

At high tide on Thursday 21st September we found Greater Sand Plover “LBR” had returned to Cable Beach! Once again it was on the edge of the flock and once again it was still a healthy looking bird despite the odd plumage and bright orange legs and bill. It is a mystery as to which countries it visited in the northern hemisphere and whether or not it could successfully breed when it struggles to be accepted here in Broome. There is a small dark spot on the upper mandible and it will be interesting to watch and see if it gets any more pigment in that area in the coming months. 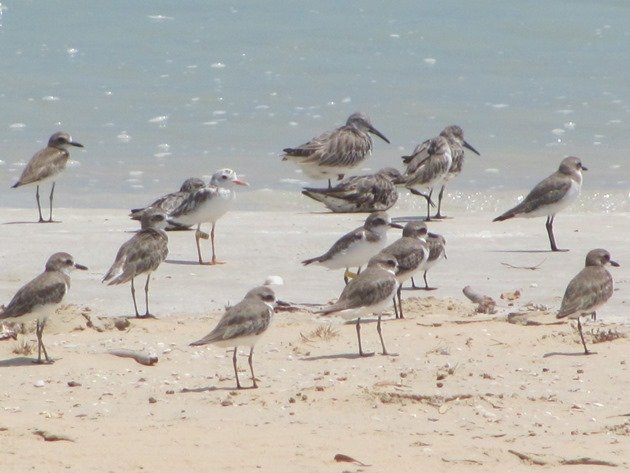 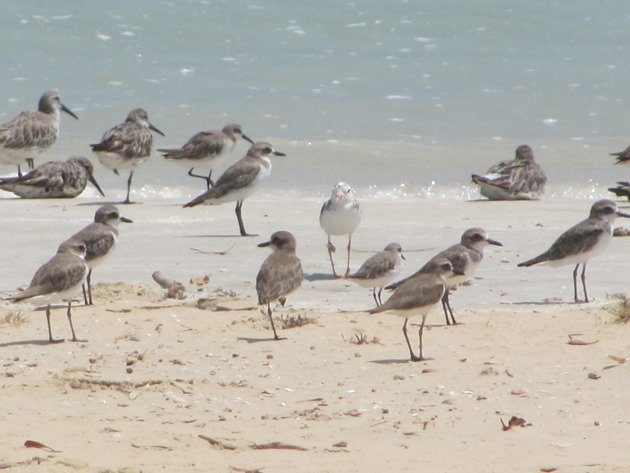 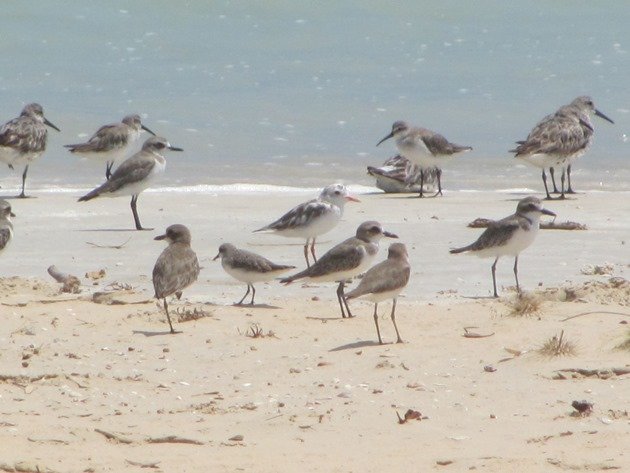 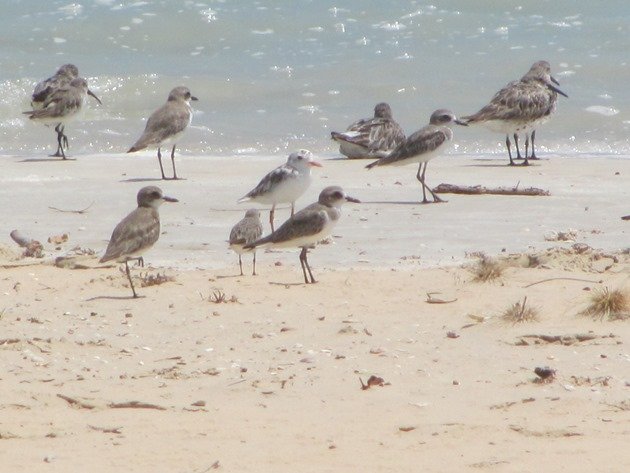 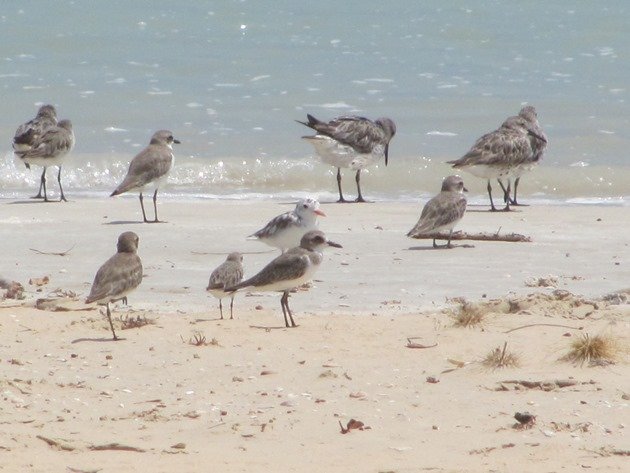 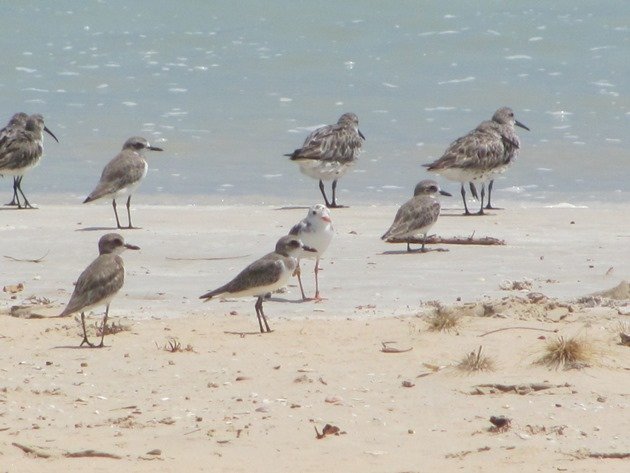 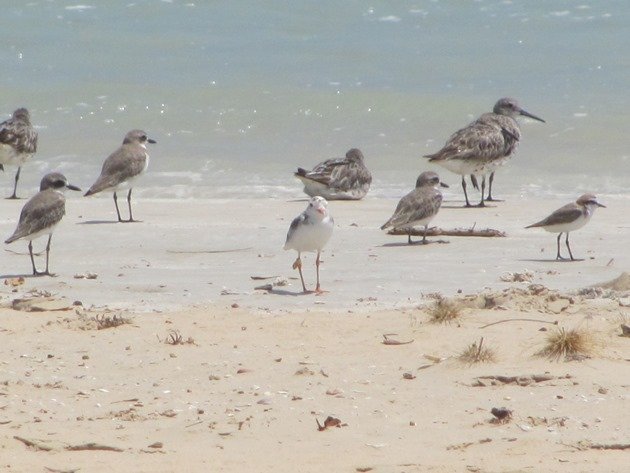 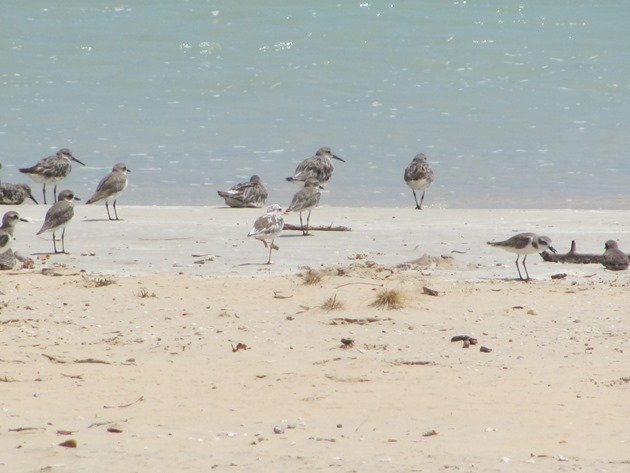 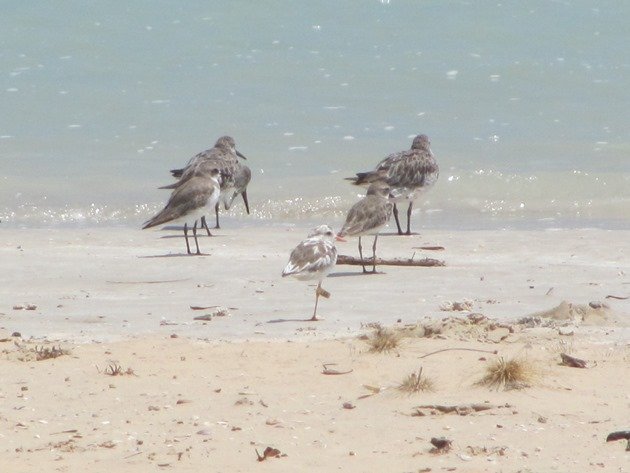 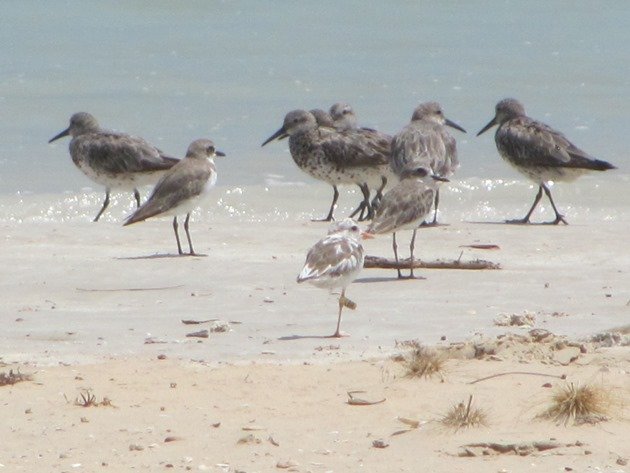 This Greater Sand Plover is a very unique individual and it will be interesting to continue to observe it during its non-breeding months in Broome. It was definitely a birding highlight this week to discover it had safely made it back to Broome along with so many other shorebirds. It is a tough world out there for all of the shorebirds that travel the flyway, but even more so when you stand out among the crowd.

Another interesting observation was the reaction to some loud bangs on the horizon by the shorebirds to which they nervously made a brief flight or looked out to sea. We were initially wondering what the noises were and it turned out there were humpback whales slapping their fins and tail on the horizon and due to the distance it was taking a second or two for the sound to travel to us all on the beach at high tide! There’s always something interesting happening at the beach! 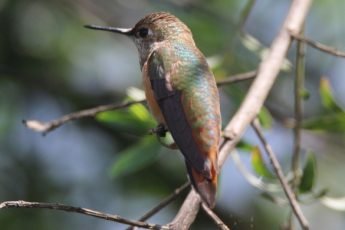 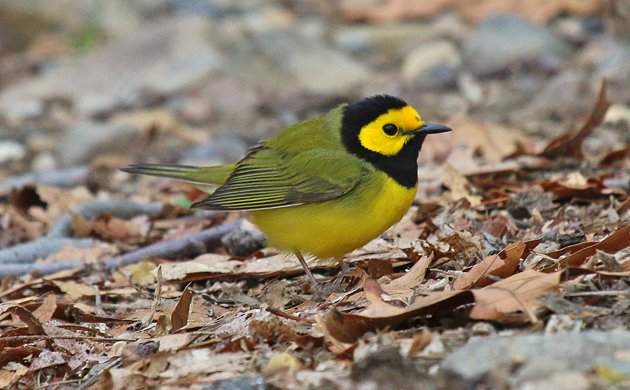