“If you want to make God laugh, tell him about your plans.” Like many of you, I had plans for this year’s spring migration: to bird the very best tour of the Balkans, heading for northeastern Greece.

First, 800 km of driving from Belgrade through Bulgaria to very NE corner of Greece and the Dadia Forest National Park with its 36 species of diurnal raptors, out of Europe’s 38. From there to the nearby Evros River Delta, at the very border with Turkey, with more easterly species such as the Spur-winged Plover. Then about a 100 km to the Ismarida Lake and Porto Lagos lagoons for breeding and migrating waders. From there some 200 km to the Kerkini Lake National Park with its 310+ bird checklist, stopping en route at the Mt. Paigeo for mountain species such as Rock Partridge. From Kerkini, I would have some 600 km more to reach home, about 2000 km in total.

Yet, instead of sweeping off the target birds in Greece, I found myself under a police curfew in Belgrade. While the worldwide pandemic may be the reason, the fact that the last police curfew in my city was introduced by the Nazis during the WWII occupation didn’t really improved the way I felt about it.

Technically, I was allowed out during working hours, but since my wife works out of the city and in this situation used our car to get there, I stayed indoors for most of the week, and then the weekend curfew from Friday to Monday would start, effectively locking me in for days. Living in a flat meant literally staying indoors, no veranda, no garden, no view…

It had affected both my physical and mental condition. I often felt grief and sorrow, and despite having time at my disposal, was totally unable to focus on any meaningful work. Claiming that the corona-virus is under control, yet, more likely worried for his approval ratings ahead of elections, after seven weeks the President eased this sentence allowing his unwilling subjects to see some daylight over the first weekend of May.

And off birding I went. The first day was rainy, the second quite windy (songbirds hiding from it), but even if we had a volcano eruption, I’d go birding.

The best moments… Driving through a poplar plantation, from clearings with young saplings to full grown trees, I heard an Ortolan Bunting singing in the rain and a Great Spotted Woodpecker calling from the tree crowns. A pair of Red-backed Shrikes perched by the roadside, my first of the season, a Eurasian Blackcap and a European Pied Flycatcher were among the bushes and lower branches, and then comes the icing on the cake, as observed from the car, between two wiper blade sweeps: a bird party bathing in the puddles in a dirt track in front of me, often two or three species together at a time.

A Song Thrush was the largest, followed by two Hawfinches, several Common Chaffinches, one European Serin, two Yellowhammers and then those two puzzles. Smaller than Chaffinches, darker above, lighter below, with no markings whatsoever… Their feathers were soaked and flattened, making for the smallness, and being wet, the birds were darker than normal. Yet, the lack of markings is a marking in itself: two otherwise indescribable Common Chiffchaffs. 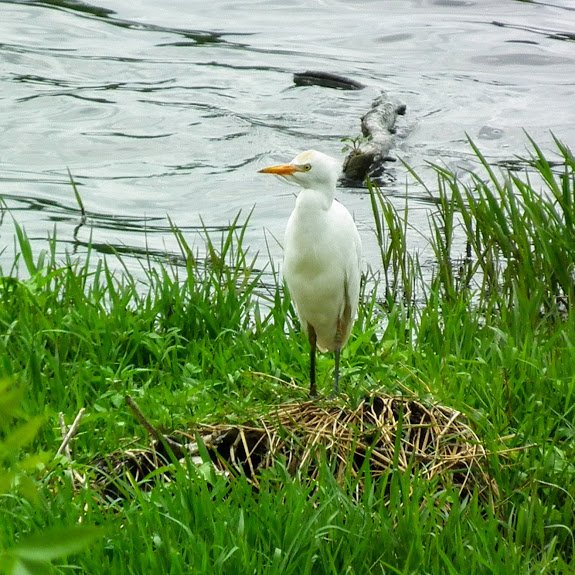 The next day, the wind was swaying the treetops. Whiskered Terns were flying on those elegant wings, a Black Stork was soaring, Pygmy Cormorants here and there… Among wading birds, there were Grey, Squacco and Black-crowned Night Herons, Great and Little Egrets. One smallish egret flew behind a willow crown in front of me, and as I was reaching for my binoculars to establish if it was Little Egret or Squacco Heron, the bird appeared at the other side of a tree. The first thing to appear was its yellow bill – a locally rare Cattle Egret!

This was only my seventh observation of this species in Europe (3 in Greece, 4 in Serbia). The cooperative egret even landed on a small grassy island to pose for my camera.

Farther on along the levee, there was a huge White-tailed Eagle standing on a big, old poplar. At first I stopped to admire it, then came a bit closer, but still giving it space so it would feel safe. I am a stranger in his realm. The local levee warden sometimes shepherds his cows here, and the eagle would stand right above him, giving him no second glance. But it’s different with me and after some time, it took flight, only to show majestically spread wings above the wetland.

And what happened to my mood swings? They are gone for a while, that is why I am sitting and writing this now. Stay safe. Avoid people. And do look out for birds. 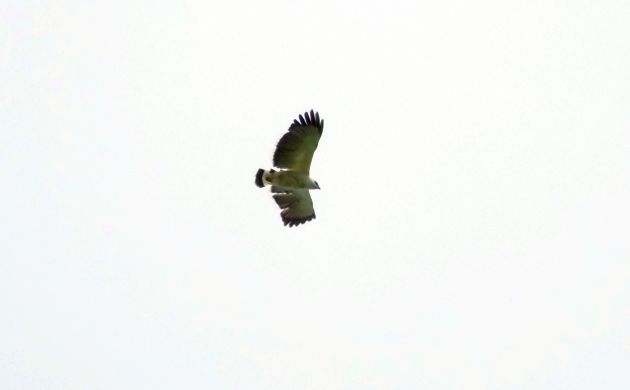 Where Are You Birding This Second Weekend of September 2016?

Best Bird of the Weekend (Last of September 2010)