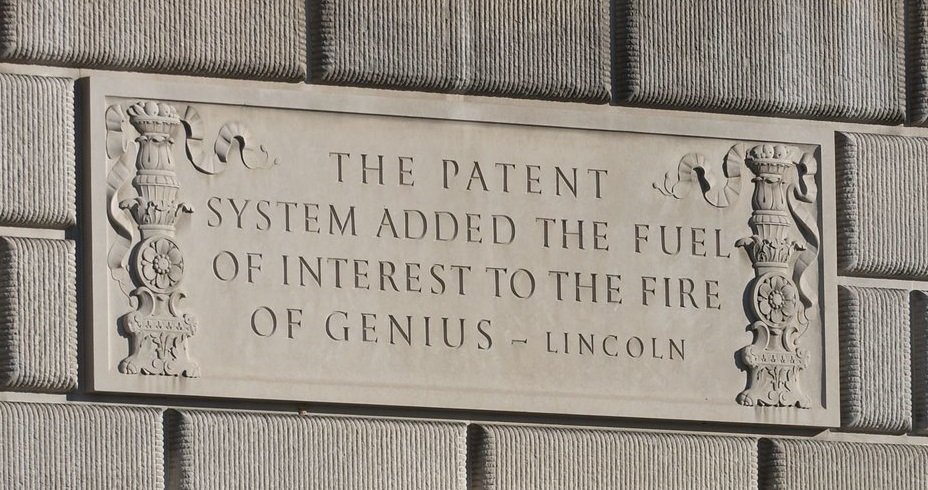 Bird feeding is serious business. The U.S. Fish & Wildlife Service estimates that Americans spend nearly $1 billion annually on bird houses, feeders, nest boxes, and baths. As a result, there are numerous books about the practice and even the history of feeding wild birds.

Sizable markets attract competition and many companies have turned to a proven way to distinguish their products:  innovation. Much of that ingenuity has been directed to a single problem: squirrels. This has resulted in a number of U.S. patents. Yes, there are patents for bird feeders, including hummingbird feeders.

But what could possibly be patentable (i.e., new and useful) as to bird feeders and squirrels in the 21st century?  Are there really new ways to design a feeder that provides seeds to birds but not squirrels?

There are many companies that make bird feeders, and several appear to have patent portfolios, but as an example, we can use Brome, a Canadian company that sells the “SquirrelBuster” line of feeders. (10000Birds review here.) Brome owns several U.S. patents.

Brome states that the “SquirrelBuster Legacy” is protected by several patents, including U.S. Patent No. 6,253,707. The inventor is Paul L. Cote, the company’s founder.  A video of the SquirrelBuster Legacy in action is here and it may provide helpful context for the discussion that follows. 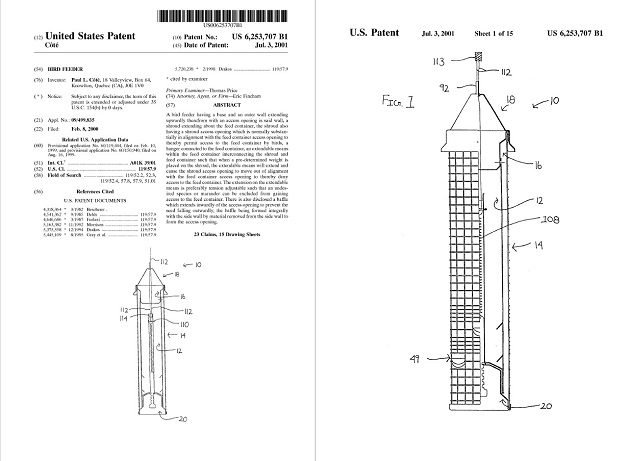 The ‘707 patent bears the uninspired title “Bird Feeder,” and it issued in July 2001. A section called the “Abstract” summarizes the invention in rather technical language and that is followed by a series of figures that illustrate the invention.

Like most patents, the ’707 patent begins with a description of the problem and the shortcomings of earlier attempts to solve the problem (like other quotes, this one has been lightly edited for readability):

Selective bird feeders are well known in the art and are designed to limit the maximum size of a bird or animal which can access the seed in the feeder.  Some larger birds will also access the seed and many such birds including crows, grackles, blue jays and the like are considered by some people to be undesirable.

A further problem associated with bird feeders is marauders which gain access to the seeds. In particular, squirrels are well known for their ability to reach the seed in a bird feeder and to devour the same. Many approaches have been tried to discourage or prevent squirrels from reaching the bird feeder, including various types of covers and baffles on poles. These seldom work as the squirrels have shown great ingenuity in overcoming such devices.

Thus, the problem is large “undesired birds” and clever squirrel “marauders” that devour seed and leave none for the desirable birds. How does the patent solve this problem?

This is a fancy way of saying: a container with holes that allows birds to access the seeds and a spring-loaded “shroud” (i.e., cover) surrounding the container. The shroud also has holes that are typically aligned with the feeder holes, allowing birds access. But when a heavy “marauder” such as a squirrel (the “predetermined weight”) gets on the shroud, it drops, causing holes to go out of alignment. Voila! The squirrel is denied access to the seeds because the holes are misaligned. Once the squirrel drops off, the shroud returns to its original position and the holes realign. 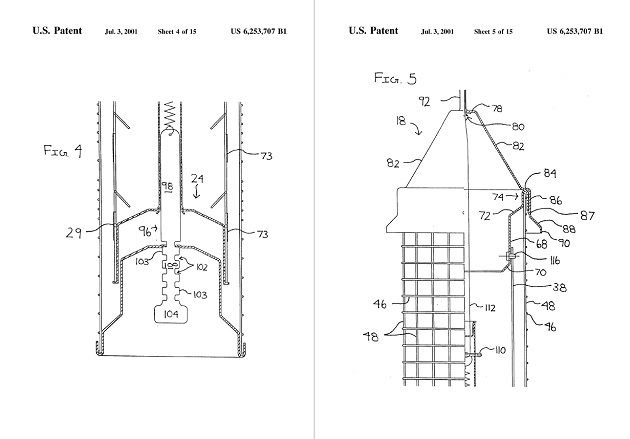 A patent is essentially a temporary monopoly to an inventor who must disclose the invention to the public in exchange for a limited term where the patent can be used to exclude others from using the invention.

The scope of a patent, however, is not defined by the description of the invention. Rather, it is defined by the numbered “claims” at the end of the patent. Claims tend to be technical, even for a bird feeder patent. For the truly interested, Claim 1 of the ‘707 patent is set forth below.

Although bird feeders might appear an unlikely source of innovation, inventors continue to apply for — and receive — patents. Notwithstanding all of the existing patents (and there are many), we have surely not seen the last bird feeder patent directed to marauding squirrels.

This post was originally published on July 11, 2017, and has been updated.

Where Are You Birding This Final Weekend of July 2011?