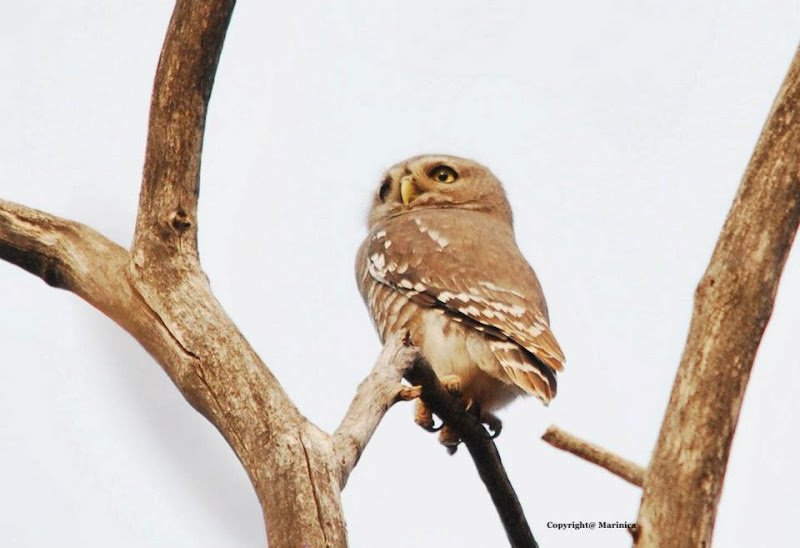 Now nearing 50 and duly lost in a mid-life crisis, Dragan Simic took to birding rather late – only half a lifetime ago, after successfully testing his inadequate skills in other life threatening activities, such as rock climbing and vertical caving. In the end, it was birding that has taken him from his native Serbia, across the Balkans and Turkey, to the very borders of the Old World: East Anglia and Spain, southern Africa and, in the instance of this epic report, India. We look forward to many more missives from Dragan.

Before the trip, Nitin Bhardwaj asked me: “What if we dip it?” “Not a problem, I would be happy just searching for it. It is not about the success of the attempt, but the attempt hides a deeper meaning in itself.” I have a quick cup of black tea and off we go. The Forest Owlet is an endemic species of this mountain range. It was described in 1873, seen for the last time in 1884 and considered possibly extinct until it was rediscovered 113 years later by an American ornithologist Pamela Rasmussen. This bird is known from only a dozen localities, with only a handful of individuals and a very fragmented habitat, hence the critically endangered status in the Red Book (one of 197 such species – also my fifth). What are the threats? We don’t really know – if we put aside already well documented habitat destruction. There is a theory that these hill forests aren’t its primary habitat, but more of a refuge, after the lowland forests were clear cut for agriculture.

From the next curve in the road, I can see the cows grazing deep in the valley: “If I was a tiger, I would check my prey from here.” Nitin was talking to rangers and explains: “A few days ago, one of the 70 or so tigers in the reserve has indeed taken a cow. Later, the carcass was taken away from the predator, so it would not get used to such prey.”
Slowly, the size of the task we have taken dawns on me: the reserve has more than a thousand square kilometers and only about a hundred Forest Owlets – the biggest known population anywhere in the World. And they hide among leaves twice the size of owlet. We are searching tree crowns: Indian Grey Hornbill, White-bellied Drongo… It is estimated that the global population of Forest Owlet is less than 400 birds strong (from 70 to 400, with a maximum of 250 adults within the population).

Dry riverbed, a bush bursting with pinkish-red flowers, a noisy flock of Jungle Bubblers on duty… and something glossy blue! We break for… a beautiful Malabar Whistling Thrush (another lifer), only to discover a busy bird party: Asian Paradise-flycatcher (my first white morph male and the second paradise-flycatcher in my life list – I have observed an African one in Botswana before), Black-hooded Oriole, White-browed Fantail, Oriental White-eyes, Red-breasted Flycatcher, White-throated Kingfisher, White-eyed Buzzard, Greenish Warbler, Red-whiskered Bulbuls, Indian Yellow Tit (which become a full species after a split from Black-lored Tit in 2005, by Pamela Rasmussen). This many birds at the same site (out of 250 of the reserve checklist) have lightened our spirits, but still – no owlet! After almost an hour, through dusk we drive back, euphoric like pilgrims returning from the pilgrimage. One Indian Muntjac deer quickly crosses two beams of light. Driving with head lights, we hope for some predator, but only Indian Hare show up. Inside the Bolero, Shane’s voice echoes through our minds: “I’m sitting on top of the world.”

« Previous post
Where Are You Birding this First Weekend of April 2013?
Next post »
Rare Bird Photo Contest Fights Extinction