I’ve been birding for nearly 2/3 of my life and, until this past weekend, I’d never even sniffed a Yellow-bellied Flycatcher.  For a long time my inability to find one of the most common members of the devious genus Empidonax was a sore spot with me.  After all, I was a reasonably experienced birder.  I had a fairly respectable life list, for those that judge birding by numbers.  I felt like I had a grasp on shorebirds (at least North American ones), was getting a handle on subadult gulls of eastern North America (they’re all Herring unless proven otherwise, yes?), but empids, empids are another thing entirely.

It doesn’t help that I’ve never lived in a place where Yellow-bellies are particularly common.  In fact, diversity of Empidonax flycatchers is not one of the hallmarks of birding in the southeast.  Sure, we’re knee-deep in Acadian Flycatchers from April through August, but along the coastal plain you get the semi-annual Least and the odd Willow.  In the Appalachians you can find Alder if you know the spots, but none of them are what you’d call common.  So my experience with this most vexing of passerines is limited, certainly compared to those birders around the Great Lakes who are up to their eyebrows in Empids of all shapes and sizes each and every year.

So I take what I can get, and one September morning while I’m out at a local state park with my son looking for migrating passerines, I spot an Empid about 10 feet off the ground in a nearby Sweetgum/Honeysuckly bramble.  It turns towards me and I see a deep olive breast and belly.  “Oh”, says I.  This, in and of itself, is not a defining field mark for Yellow-bellied Flycatcher despite its name.  Acadians show this too, particularly in the fall and it’s the unprepared birder who stands to be mistaken by that misnomer.  But that was not me, I disregarded that deceptive field mark and focused on the throat, looking for that yellow wash from beak to belly that would be the telling characteristic.  And I saw it, or, I’m pretty sure I did.

The bird popped up again. I grabbed for my camera and watched through the viewfinder as the autofocus dialed in on some leaves before the bird dropped into the brush again.  I don’t know if you’ve tried to take photos of birds while a defiant 30 pound 2 year old kicks you back and insists “Walk, Dad. Walk!!!”, but it’s not particularly conducive to high quality photography (or Empid ID for that matter).  When an Empid flew to a clearing nearby, I did not hesitate and opened up the shutter on my target. This, in turn, causes me to question my initial identification of the bird itself, even though at the time I was confident I was seeing the olive-yellow from beak to belly of the bird I wanted to see.  And as the memory fades into oblivion (I know, I know, I really should take field notes but I had my kid with me and excuses excuses excuses, etc), it can only get worse.

So it goes with fall Empids.  Even when you’re sure, you’re not sure.  Heck, maybe I’ll just take it off after all.  I mean, I’ve made it this far without Yellow-bellied Flycatcher.  Why start now? 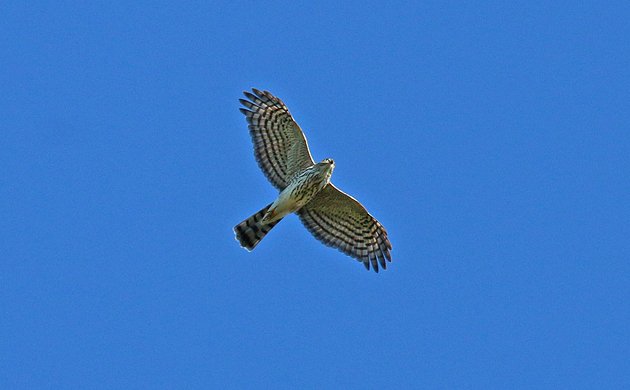 Birds Are Migrating South. It Must Be Fall!