Marble Bar is situated in the Pilbara area of Western Australia and is the largest shire in the world. Marble Bar has some interesting history and was first gazetted in 1893 following the discovery of gold three years earlier. The rock formation that was originally thought to be marble is in fact jasper and is throughout the area. It shows the most magnificent colours when wet, but is still spectacular when dry. In 1891 the population exceeded five thousand due to the gold rush, but nowadays there are only about two hundred people living in town. The town now runs a solar power station with back-up diesel generation and the array of panels is easily observed on Google Earth. “Largest Shire in the World” sign on the way into town

Marble Bar is generally a place that tourists visit in the cooler months of the year, which are the few months between June and September. The reason for this is the fact the Marble Bar holds the world record for the longest number of days over 37.8c/100f and the event took place over 160 consecutive days from October 31st 1923 until April 7th 1924. During December and January the temperature is usually in excess of 45c/113f and for more than six months each year the temperature exceeds human body temperature! So, why would we visit in November….are we mad!? Don’t answer that! It is always interesting to visit areas where there is limited natural water and observe concentrated bird life. If you want to see what the weather is doing in Marble Bar right now, then click the link and if you are feeling cold in the northern hemisphere imagine the feeling when you open your oven door! The temperature is high and the humidity is very low. It is actually easier to cope in these dry temperatures than in very humid areas with lower temperatures. There is a digital display of the current temperature when you enter town, because in many ways the locals are proud of their hot temperatures!

On the edge of town we had Spinifex Pigeons– race ferrugines running along the edge of the road followed by Crested Pigeons and they knew where there was water at dripping taps! The first area of grass that we came across was covered with Galahs and Yellow-throated Miners vying for the shade. It was only 43c according to the digital display! We asked at the small shop/petrol station/post office about the free local town map and they were shocked to see travellers in November! They had no maps left, but sent us over to the caravan park where they did still have some maps left and Magpie-larks at their dripping taps! We then headed for Chinaman’s Pool, where we were advised there was not enough water left for swimming at this time of year! The pools are what remain from the rain months ago when the Coongan River would have flowed. We knew that we would not be swimming, but we also knew that whatever water remained would be attractive to any birds in the area. Sure enough, we found Rainbow Bee-eaters, Painted Finches, Willie Wagtails, Fairy Martins and a pair of Black-fronted Dotterels. The area was alive with birds once you stopped to look and the tall trees produced Australian Ringneck Parrots, Sacred Kingfisher, Black-faced Cuckoo-shrikes, Little Corella, Budgerigars, Nankeen Night-herons and both White-plumed Honeyeaters and Brown Honeyeaters. A Brown Falcon soared overhead and Grey-crowned Babblers chuckled away nearby. Although the temperature was very high and there was not a lot of water there was a great variety of birds. Moving closer to the remaining water we soon observed Pacific Black Ducks, one lone Grey Teal, an Intermediate Egret and a Great Egret, a juvenile Black-necked Stork and a lone Australian Pelican. We did not get too close, because we did not want to disturb the birds in such extreme temperatures. The rocks on the edge of the remaining water were roosts for Little Black Cormorants and Little Pied Cormorants and a White-necked Heron had found a shady spot to rest in the heat of the day. A lone Common Sandpiper was running along the edge of the mud and a family of Masked Lapwings were on the far bank. Peaceful Doves and Diamond Doves came down to drink at the water’s edge and this small body of water was very important to all of the birds. We also observed Black-faced Woodswallows, Little Woodswallows, a Rufous Songlark and Australasian Pipits in Marble Bar, so all things taken into consideration we did pretty well in such a hot town in November! Maybe you don’t get this sort of variety if you visit in the cooler months when everybody is swimming in the Coongan River! In November the pools are reserved for the birds! 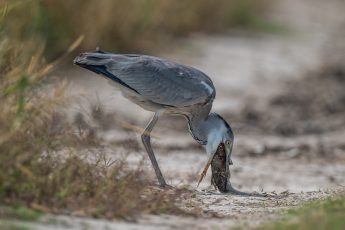