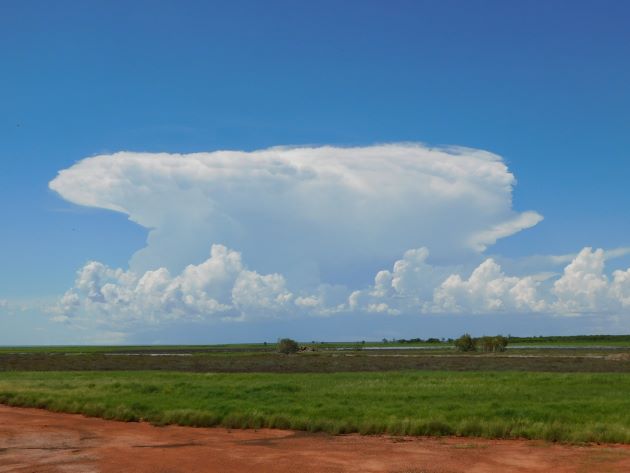 Over the last few weeks we have had some significant rainfall in the Broome area. It didn’t take too long after the big rain event at the end of January for Roebuck Plains to flood and the birds to arrive. The highway out of Broome towards Derby has also become great for bird-watching. Most of our rain comes in the late afternoon, so we were out in the middle of the day last Sunday to observe the birdlife across Roebuck Plains. The above photo is what you start to observe in the middle of the day and before long the cloud billows up and then down comes the torrential rain.

The water was still flowing across the highway, but only in one area in the middle and it was not deep. The WA Travel Map always offers the most up to date information, because the depth can change quite suddenly. We always travel through the shallowest section to prevent damage to the highway. This is the only highway around Australia in this part of the country and we don’t need it falling to bits!

Water across the highway

Sadly, one of the first birds that we saw was a recently deceased Barn Owl. It appeared to have been hit by a vehicle overnight. There was a large congregation of Glossy Ibis and Egrets at the near side of Roebuck Plains and there are now plenty of tadpoles and frogs for the birds to feast on.

The Great Egrets, Little Egrets and Intermediate Egrets are in breeding plumage and look quite spectacular.

There are now thousands of birds in the area and they have dispersed to some extent. There is only so much water that a bird can take and even the ducks appear to get a bit sick of constantly being wet! All of the birds are seeking out the higher ground and many appear to be making plans to breed if they have not started already. The fence-line and areas around the gates on the station property offer the highest ground and that is exactly where the birds are congregating.

Wandering Whistling-Ducks under the fence

Gathering birds under the fence

Red-kneed Dotterel under the station gate

Every little bit of higher ground is occupied

Due to the high concentration of both tadpoles and frogs there are hundreds of Whiskered Terns now in the area and they are likely to breed. They were busy feeding around the cattle water trough that the cattle can’t get to unless they want wet hooves!

It isn’t just the birds that seek the higher ground, but also the reptiles. We encountered five goannas that had found the higher ground by swimming and then stood up on their hind legs to assess the situation!

Goanna on its hind legs

A Red-backed Fairywren was calling from the top of a bush and to the right a dragonfly clung to a branch. Dragonflies are associated with a change in the weather, but it’s going to be a few weeks yet before we see the significant numbers of dragonflies that indicate there is a change!

There is an incredible variety of birds as you cross this short stretch of highway across Roebuck Plains and you can easily observe up to fifty species or more. There will continue to be good bird-watching opportunities for several weeks to come and last year we were able to enjoy the area into April and we had not had as much rain as so far this year.