Sea Snakes and other creatures of the beach 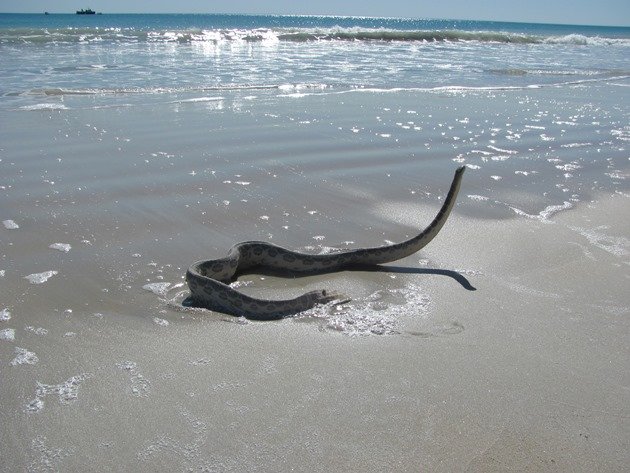 Although I usually write about the birds that we observe we are always encountering other creatures along our coastline around Broome and it has been almost five years since I introduced you to some of our local Sea Snakes. The problem with Sea Snake identification is you are supposed to count scales and check other identifying features, which we often don’t do too thoroughly! We tend to focus on returning Sea Snakes to the sea where possible and later try and identify them from photographs. A Sea Snake is not able to use its muscles to raise itself up and bite you if you hold it by its tail, so that is the way we put it back into the ocean or by using a stick where it is easier. There is a huge variation in the size of Sea Snakes and usually they appear washed up after rough seas and they may well be sick or weak when they wash up, but by returning them to the ocean we do give them a second chance. I am hoping the identification on the Sea Snakes below is correct, but feel free to correct me! Sea Snake-Hydrophis (elegans?) being returned to the ocean

Other creatures that wash up include the beautiful Porpita porpita, which is a marine organism that often washes up around September when the winds change and the sea becomes rough. It lives on the surface of the ocean and drifts with the ocean currents. Another interesting creature we don’t see very often is the Common Violet Snail and it also feeds on the surface and actually eats the Porpita porpita. Although they are always not far off the coast we don’t see them washed up very often at all. When the wind direction changes we also find Blue Bottle Jellyfish washing up, because they are also floating on the surface and our at the fate of the wind. They can sting you even when they are on the beach, so it pays to be careful and wear some shoes! If you had been considering whether or not to wear shoes, then there’s always the Blowfish that may just have washed in and be lying just below the surface! Recently after a storm we found another odd creature on the beach and it was not its usual habitat. Although it looked like a snake it was in fact a Burton’s Snake Lizard, which has very small flapped legs that tuck up when you pick it up. Due to the cliffs in the area we collected it up and carried it quite some distance until we could return it to its natural habitat in the grassy bush. Gazing out across the Indian Ocean can also bring surprises around Broome and below is a Saltwater Crocodile that we observed and due to the fact that it was heading for the “swimming beach” we contacted the authorities. The beach was closed for swimming until it was captured a few days later when it came to shore. Another creature that comes onto the beach and is not dangerous is the Agile Wallaby. They wander down to drink the water and also to lie in the cool shade of the mangrove trees. I hope you have enjoyed seeing some of the other delights of our coastline, while we head inland for a bit of birding!