The first Pied Oystercatcher chick of 2020 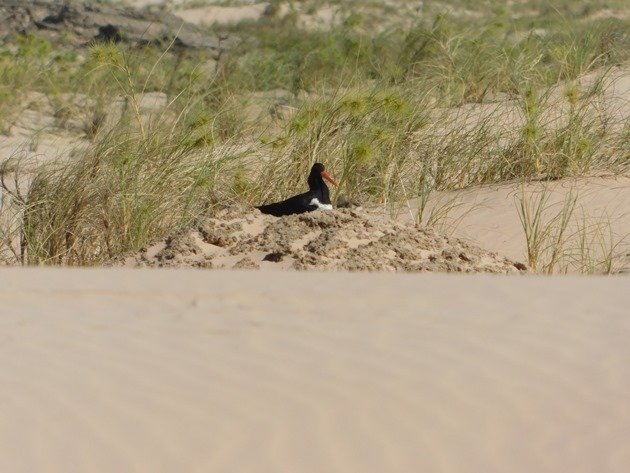 Our first Pied Oystercatcher eggs for this year’s breeding season were laid early and were due to hatch last weekend. This pair of Pied Oystercatchers never seems to have a problem with incubating their eggs. They take it in turns over the twenty eight days sitting or hovering over the eggs. Once the eggs are close to hatching they will display aggressively and call out. They will sometimes display a broken wing to distract intruders.

On Sunday 11th July the Pied Oystercatchers were sitting on two eggs in the late afternoon. We returned to check on the nest site the following afternoon and there was one chick. It had most likely hatched out overnight and was very agile. The Pied Oystercatcher chick stumbled around the nest site while the adult tried to keep it close by. The remaining egg still needed to be incubated. The eggs usually hatch out quite close together and then the family can all move away from the nest site. Once the egg hatches the egg shell is removed and has been observed being carried to the ocean and dropped. This is a clever move, because the evidence of a chick is mostly removed. We don’t know if all Pied Oystercatchers do this, but this pair do.

The newly hatched Pied Oystercatcher chick has excellent camouflage just like the egg that it came out of. They are a large chunky bird with substantial legs when they hatch out. It was encouraging to see the newly hatched chick move around, but we were anxious that the other egg would soon hatch too. There are dangers around the nest site and the sooner they could move the family away from the exposed nest site the better. The Pied Oystercatchers hide the chicks in the thick vegetation once they leave the nest site. This offers a lot more protection than the exposed nest site.

In the header photo the Pied Oystercatcher chick is only just to the right of the adult. In the photo below it is a lot clearer. The “bib” on the front of the chick is clearly defined even at less than a day after hatching. 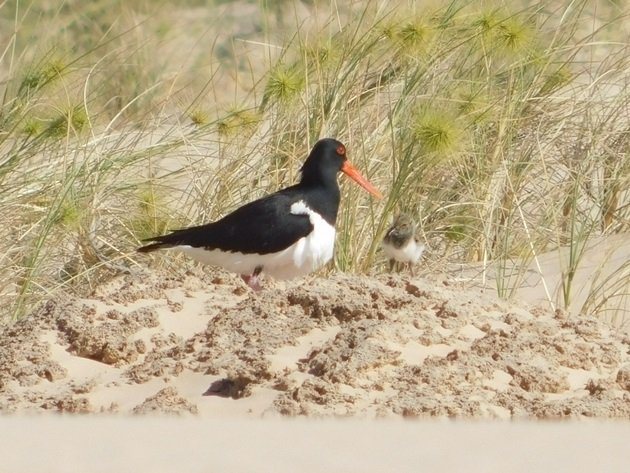 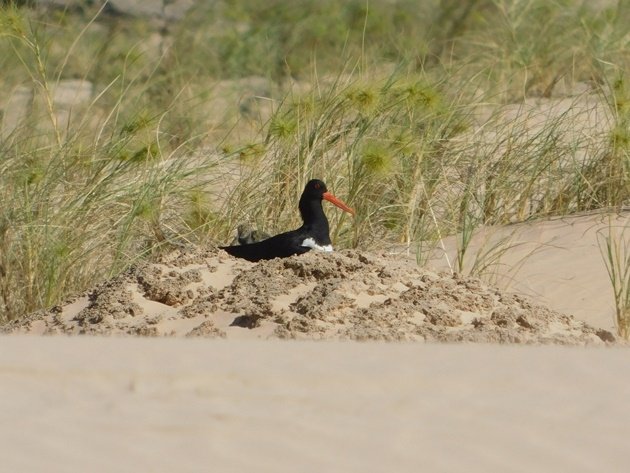 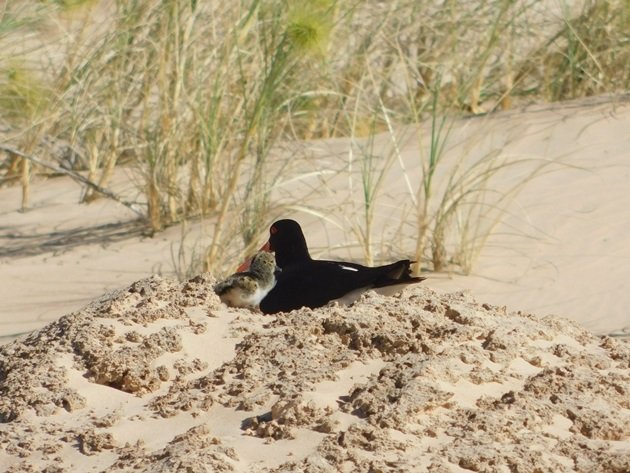 As we sat in the distance observing the pair of adult Pied Oystercatchers there was a changeover of adults. The chick stood up and you could really see how exposed the nest site was. 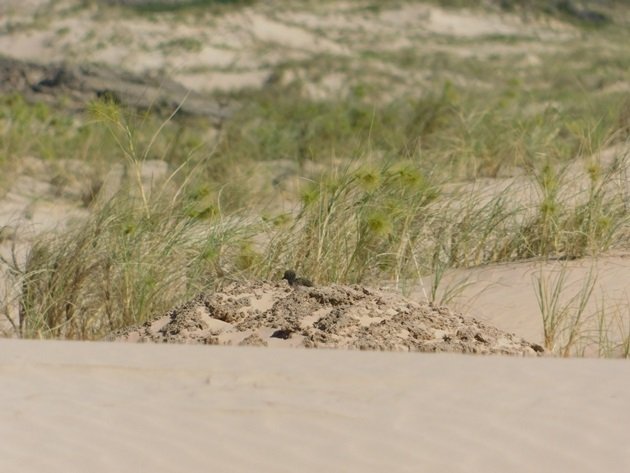 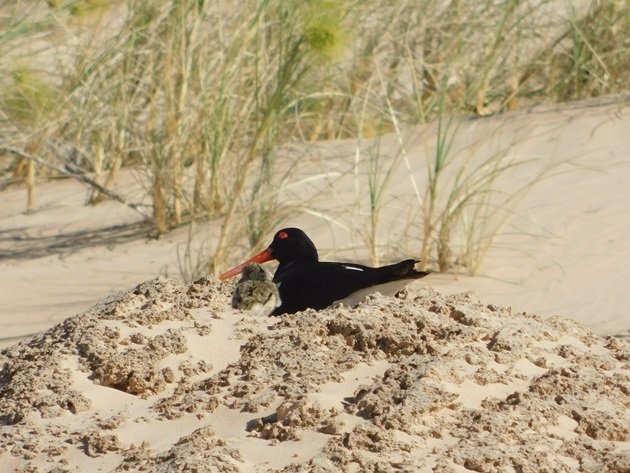 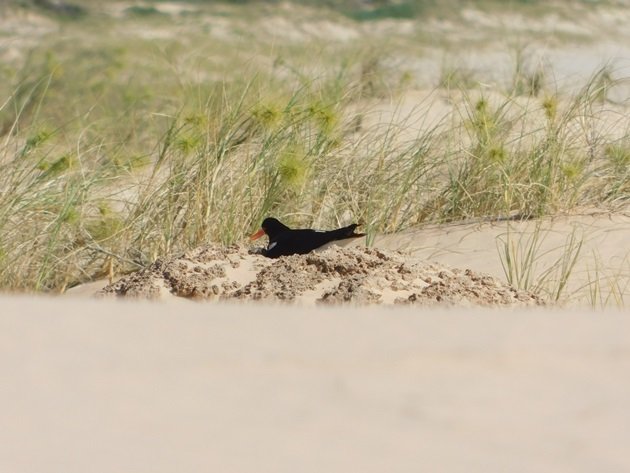 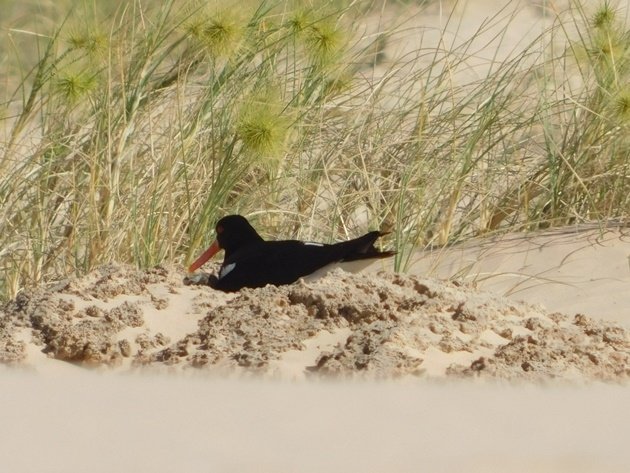 We returned to the area the following day. We were hopeful of finding the family moving through the dune system. When we observed both adult Pied Oystercatchers at the ocean we were concerned. There was no sign of a chick and we moved towards the nest site. There was no reaction by the adult Pied Oystercatchers. There was still an egg at the nest site and it had no indication that it would hatch. It appeared that they had both lost the chick and given up on the egg hatching. We can only speculate what took the chick. 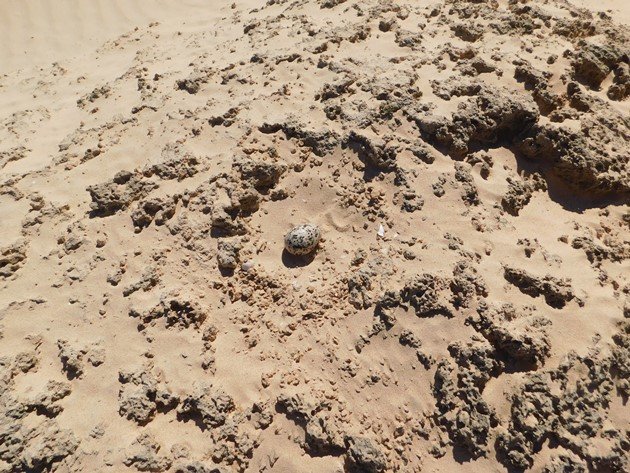 This is a sad outcome for the first attempt at breeding this year for Pied Oystercatchers. However, this is far from unusual. This is typically what happens every year along our coastline. If one Pied Oystercatcher chick survives in any given breeding season out of twenty three breeding pairs and numerous attempts at breeding it is a miracle! This is something that we have become very familiar with over the years. We are hopeful this pair of Pied Oystercatchers will lay a new clutch of eggs within a fortnight.

The other two pairs of Pied Oystercatchers close to this pair are still incubating their eggs. We can only hope they are more successful than this pair.

Best Bird of the Weekend (Second of November 2011) 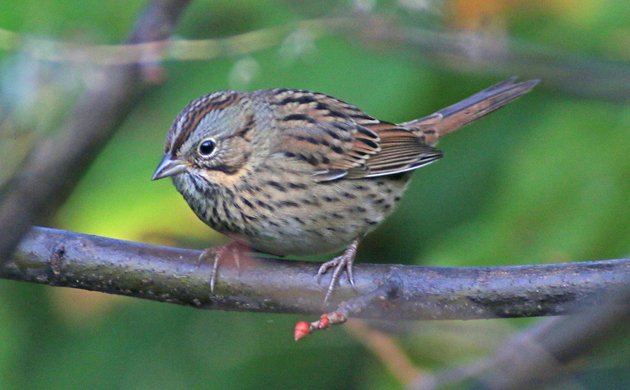 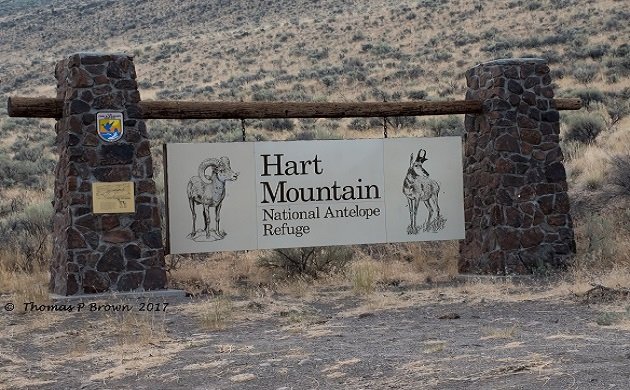