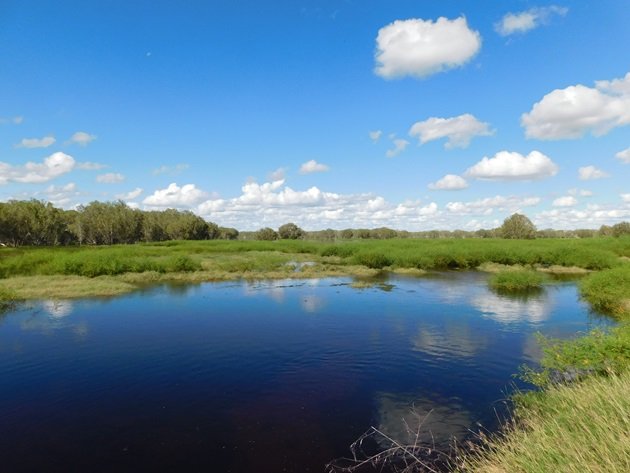 A few weeks ago I showed you how flooded the station property was on each side of the highway heading south. Well, it did start to dry out a little, but then we got a lot more rain. The first culvert you come to when you drop down onto the open plains is now flowing nicely under the road. There are plentiful fish to be seen in the clear water. The header photo shows the water running under the culvert.

This highway has remained open, but heading north the highway has been closed for days on end. The low lying areas have flooded, but thankfully the towns have been saved from flooding. It has been a completely different story on the East coast of Australia. It has been devastating to watch and hear about the historic floods over the last few days. Many of these areas were still recovering from the historic bushfires over last summer.

When huge areas of land flood the creatures have to work out where to go. Around Broome we observe creatures climbing onto the signs at the edge of the highway. In New South Wales there have been thousands of spiders trying to get away from the water by climbing fences.

The water is right to the edge of the highway in some areas as you across the plains. It has also lapped the edges in a few sections. The Masked Lapwings, Magpie-larks and Black-winged Stilts are playing “chicken” with the traffic. This has not ended well for at least two of the Masked Lapwings.

Playing “chicken” on the edge of the highway

The station access from the highway is now completely underwater. It will be some time before any vehicles can go through the gates. The cattle are clever enough to move across the property and get away from the deep water.

Even the Pacific Black Ducks have decided they need to stand on the gate to get out of the water when they have had enough!

Pacific Black Ducks out of water!

There are still huge flocks of Whiskered Terns. Black-winged Stilts line the edge of the highway and there are also Red-kneed Dotterels. The Marsh Sandpipers and Common Greenshank are feeding up before they head north on migration.

Black-winged Stilt beside the highway

The number of Glossy Ibis has been increasing steadily over recent weeks. They are constantly on the move and feeding across the plains.

Glossy Ibis on the move

The predominant duck at the moment in that area is the Hardhead. The vegetation has got so long in places that you can’t actually see a lot of the birds that are present. It takes a raptor to upset the birds for you to observe just what is out there!

An Australasian Swamphen was getting very agitated, but would not move. We suspect it had young in the area. The Eurasian Coot are in large numbers too now, but can easily hide amongst the reeds.

Australasian Swamphen beside the highway

There are significantly less locusts than there were a few weeks ago. However, they are still getting in the way when you want to take photographs!

Locust on the car window

Our wet season is not over yet. We watch the afternoon storms roll in each day. The rain is making it to the plains, but the sea breeze is mostly keeping the rain from Broome. All of this land will be flooded for quite some time yet, but it makes for great birding from your vehicle. We won’t be leaving the bitumen even by four-wheel drive for some time yet!

Although our movements are restricted the migratory shorebirds are starting to head north. The Broome Bird Observatory is recording the departures here.

In Defense of Wildlife Rehabilitation