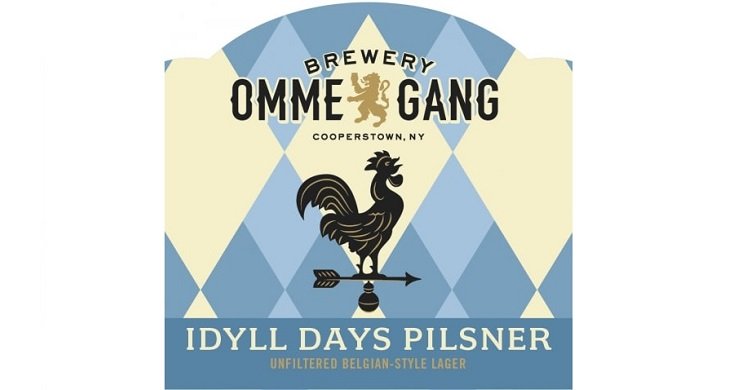 It’s hard to believe that a few weeks ago I was checking the weather forecast every day, eagerly anticipating any warm, southerly winds that might carry with them new arrivals during the height of spring migration in May. But that’s all a distant memory now in these first few days of July: migration ebbed to a mere trickle over a month ago, before giving out for good with an inevitable but always disappointing suddenness.

The winds have abated too, with the gentle breezes of spring giving way to the still, oppressive heat of summer. Lately, it’s been hot and mostly dry here in eastern New York lately, with long stretches of humid, summery days without wind or rain, when even the slightest breeze would have provided some relief. But none came. And as the windblown birds settled down for the summer breeding season and the wind subsided, I found any concern for which way it was blowing died down with it. 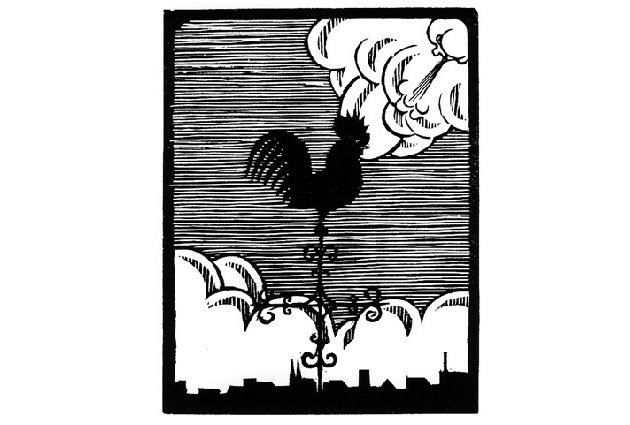 Bob Dylan once declared you don’t need a weatherman to know which way the wind blows. And that’s certainly true if you’ve got a weathervane handy. Admittedly, the one painted on the can of this week’s featured beer – Idyll Days Pilsner from Brewery Ommegang of Cooperstown, New York – won’t do you much good in measuring wind direction. But luckily for us at Birds and Booze, you don’t even have to be a birder to recognize this one as that most well-known, bird-inspired incarnation of the weathervane – the weathercock. And as long as the winds have slackened and the birds are staying put for a bit, we might as well take the opportunity to enjoy a summer drink and briefly delve into the curious history of these rooster-shaped steeple-toppers. 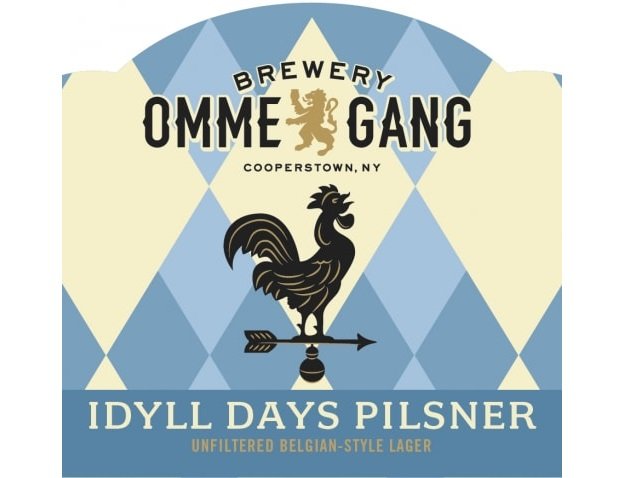 Idyll Days is a new and very welcome year-round offering, first released this past March by Brewery Ommegang.

Weathervanes are an ancient invention, believed to have been developed independently by both the Chinese and the Greeks around the 2nd century BCE. Their use in ancient China is attested in the Huainanzi, a collection of essays compiled before 139 BCE. In the Hellenistic world, the first weathervane was installed atop the Tower of the Winds in Athens by the Macedonian mathematician Andronicus of Cyrrhus. This Greek weathervane was reportedly fashioned to represent Triton, the sea god son of Poseidon and Amphitrite, making it perhaps the earliest example of the great decorative potential of these meteorological instruments. Following this early example, weathervanes in classical antiquity often assumed the form of animals and mythological beings – often deifications of the four compass winds – traditions that carried on in Europe long past the fall of Rome. 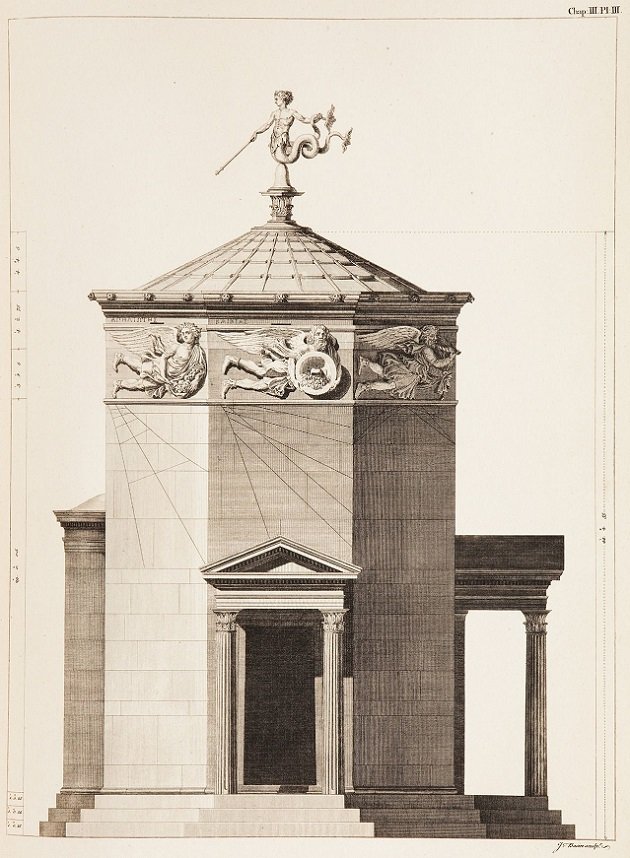 An eighteenth-century reconstruction of Andronicus’s Tower of the Winds, topped with a Triton weathervane, from Stuart & Revetts’s The Antiquities of Athens (1762).

But weathervanes were not always attached to buildings: the word “weathervane” comes from the Anglo-Saxon fana (“flag” or “banner”), possibly from cloth pennants flown in battle to let archers know the direction of the wind.

Of course, there may very well have been fowl-inspired weathervanes in ancient Greece and Rome. But our ubiquitous weathercock owes its popularity in later European centuries to Christian iconography. The rooster is an attribute of Saint Peter, who famously rejected Christ three times “before the cock crows twice” on the morning of the Crucifixion, a denial foretold by Jesus at the Last Supper. Peter’s galline emblem later became an official Christian symbol at the behest of Pope Gregory I, and in the 9th century, Pope Nicholas I issued an edict decreeing that a cockerel was to be displayed on the top of churches as a reminder of Peter’s denial. Besides, the rooster’s distinctive crowing at sunrise can be interpreted as an announcement of the triumph of light over darkness, the victory of good over evil, and the hope of a new day. And there’s something inspiring about the weathercock always facing directly into the wind the way it does, undaunted. 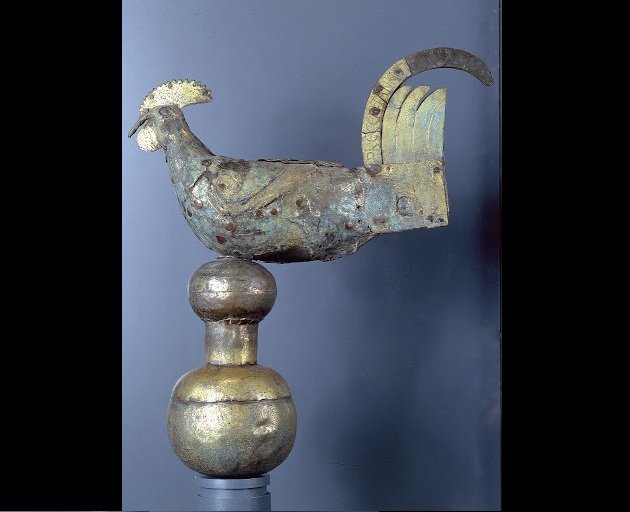 The Gallo di Ramperto, the oldest extant weathervane in the world in the shape of a rooster, dating to the ninth century CE. This early weathercock once graced the church of Santi Faustino e Giovita in Brescia, Italy, but now resides at the Museo di Santa Giulia in the same city.

Even more practically, as anyone who’s spent a night out in farm country knows, the rooster’s vociferous crowing makes an excellent alarm – just the thing to call the faithful to prayer, especially in the days before chiming clock towers or church bells ringing out to mark the canonical hours. In time, the weathercock became an ever-present fixture of ecclesiastical architecture for centuries to come – and soon began to adorn barns, cupolas, rooftops, and any other structure in need of a highly-visible, easily-understood communal weather station, particularly in the days when so much mechanical power and navigation were dependent on the winds. 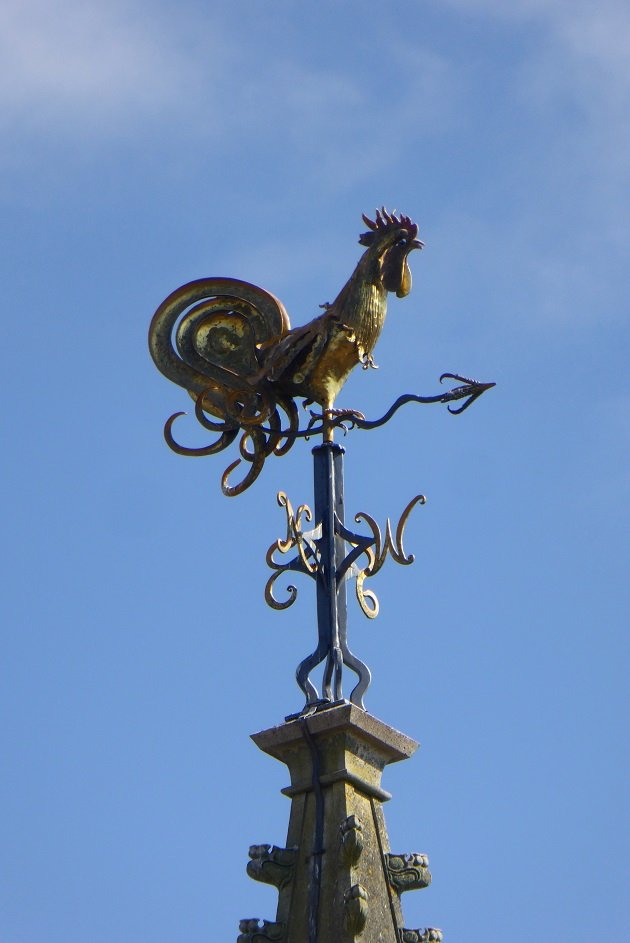 This particularly ornate cockerel sits atop Holy Trinity in Minchihampton, in the English Cotswolds.

But these days, with weather satellites in orbit miles overhead and meteorological forecasts for the entire planet at our fingertips, there’s no need to rely on some possibly rusty, roof-bound rooster to let us know which way the winds are blowing. So, the weathercock may be a quaint relic of a bygone age, but whenever you happen on one, it’s always a handsome reminder of the care and whimsy that went into adorning our buildings not so long ago. And living birds still seem to appreciate weathervanes as perches! 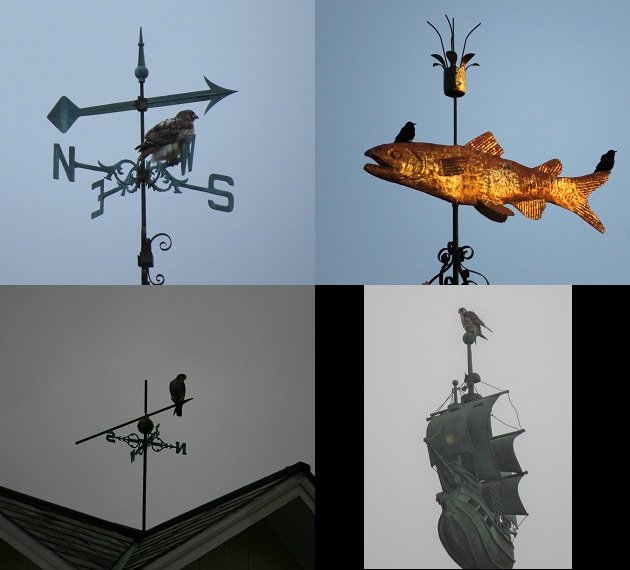 A few of my own observations of birds perching on Albany, New York’s weathervanes (clockwise from the upper right): A pair of Fish Crows (Corvus ossifragus) perched on a “fish”vane (what else?) on The Albany Academy by architect Marcus T. Reynolds (1869-1937), a Peregrine Falcon (Falcon peregrinus) sitting on an eight-foot-tall weathervane in the shape of Henry Hudson’s Half Moon on the Delaware & Hudson Railroad Company Building (another Reynolds masterpiece), a Merlin (Falco columbarius) sitting on a surprisingly simple weathervane at Albany’s Normanskill Farm, and a Red-tailed Hawk (Buteo jamaicensis) on the Old Albany Academy Building designed by architect Philip Hooker (1766-1836).

There’s also a folksy, rustic charm to the weathercock, making it a fitting emblem for Idyll Days Pilsner from Brewery Ommegang, a farmhouse brewery nestled in the rolling farmland outside of historic Cooperstown, New York. Operating out of a former hop farm since 1997, Ommegang is well regarded for its dedication to Belgian beer styles, but it’s nice to see the brewery venture outside of the traditions of Flanders and Wallonia on occasion with a release like this. Not that Belgium is any stranger to pilsner, the cold-fermented golden lager born in Bohemia that took the world by storm in the mid-nineteenth century, as any drinker of Stella Artois – Belgium’s homegrown interpretation – can tell you. But Idyll Day is a far cry from your standard, green bottle Euro-lager. Brewed with traditional Czech floor-malted barley, it’s a smooth, pleasant, well-crafted brew and a definite step up from the standard pale lagers that dominate traditional American summer drinking. And unlike most crystal-clear lagers, Idyll Days is presented unfiltered, in a fairly obscure style known in Germany as Kellerbier (“cellar beer”), leaving it a hazy but very pale straw yellow with a thick, rocky head on top. There’s the merest hint of sulfur on the nose, but Saaz hops, a famed Czech variety, provide a soft, herbal and floral aroma over a clean, biscuity backdrop. Flavor-wise, Idyll Days hits all the right notes for well-balanced pilsner: a minerally dryness, sweet, honeyed malt with a fruity touch of blackcurrant, gentle hop bitterness, and a mild, drying dash of licorice in the long, refreshing finish. 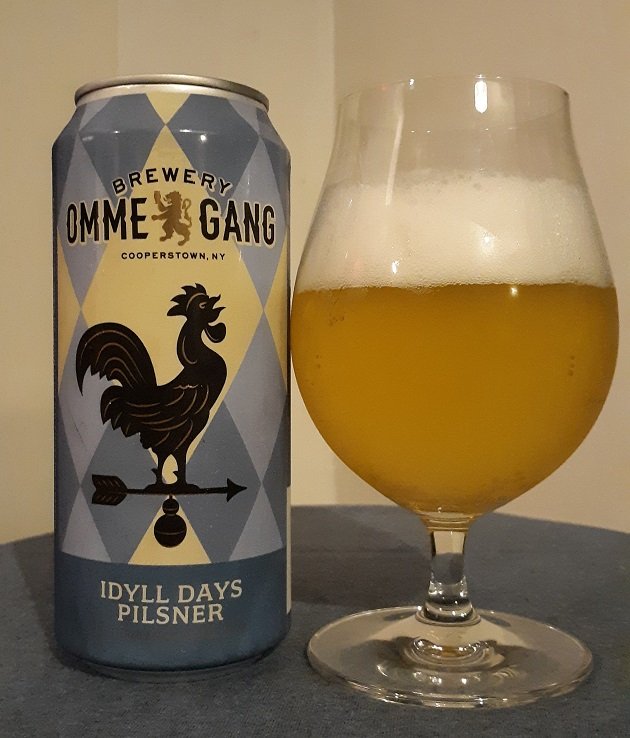 The summer doldrums of birding have hit especially hard this year, with many of us forced to cancel the season’s long-awaited travel and vacation plans. But the birds don’t seem to mind staying put for a few months, so perhaps we can take a cue from them and enjoy an idle summer at home — wherever that is for now — while it lasts. Besides, before you know it, the winds of change will begin to blow again and the birds will know it’s time to go. And once fall migration begins, and we’ll all be back to watching the weather again, on the lookout for northerly winds. So, be sure to mind that weathercock. 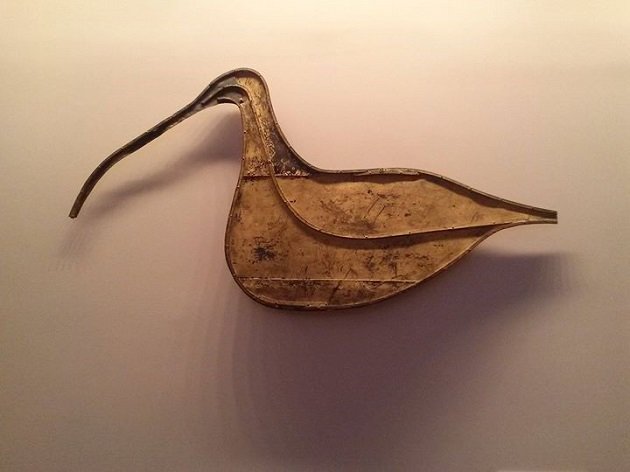 Finally, just to demonstrate that roosters aren’t the only birds found on weathervanes, here’s a Whimbrel (Numenius phaeopus) I found way in the back of the American Wing of the Metropolitan Museum of Art. The gallery plaque actually identified the bird as a “Hudsonian Curlew” (Numenius phaeopus hudsonicus), a North American taxon formerly thought distinct from Old World whimbrels (classified by John Latham in 1790), but now only considered subspecific. However, the museum seems to have misinterpreted these taxonomic revisions, describing the Hudsonian Curlew as “extinct”. 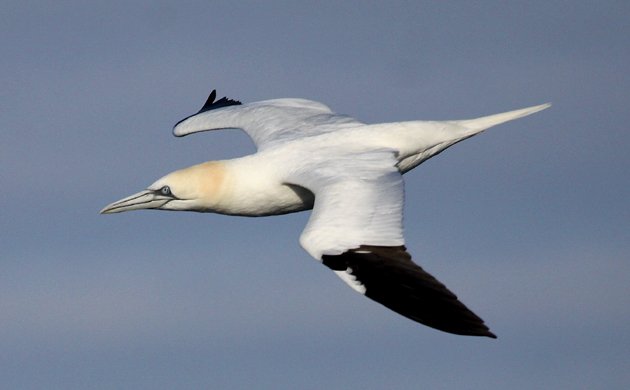