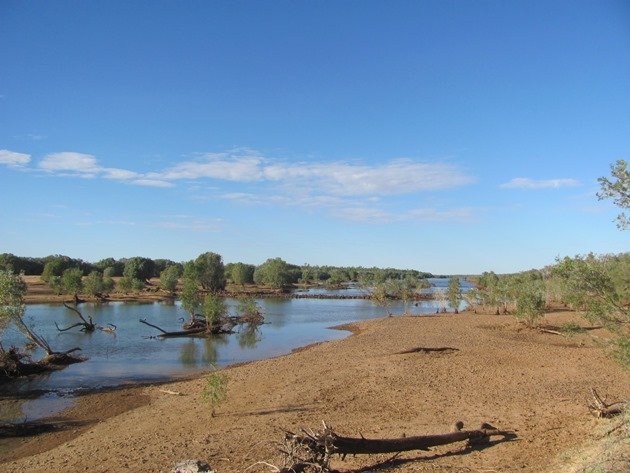 Following on from last week’s post about Langi Crossing and some of the larger birds species that you can expect to find I will now let you know of some of the smaller species you may encounter along the Fitzroy River at this location. A combination of larger and smaller species on each visit provided about eighty species on each of three recent visits, but the species did vary slightly on each visit. On our first visit at the beginning of July the native trees were in full flower along the banks of the river and they were very active with Brown Honeyeaters. As the weeks passed by the number of Brown Honeyeaters diminished, but then there was an increase in Yellow-tinted Honeyeaters and then Black-chinned Honeyeaters. One of the noisiest of the smaller birds was the Rufous Whistler and there were numerous pairs as you walked along the river bank in either direction. It seemed like the call of the male Rufous Whistler never stopped and it was only when a male bird finally stopped in a tall boab tree with no leaves that I was able to photograph it! 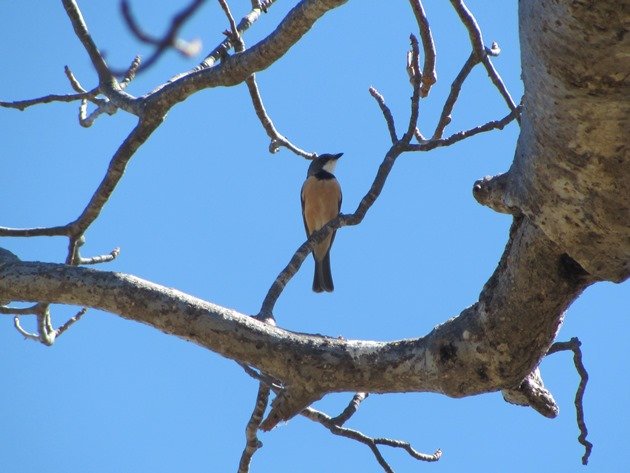 The female Rufous Whistler was actually a lot more inquisitive and would come to within a few metres of where we would sit on the edge of the river in the shade. There’s something special about inquisitive birds! 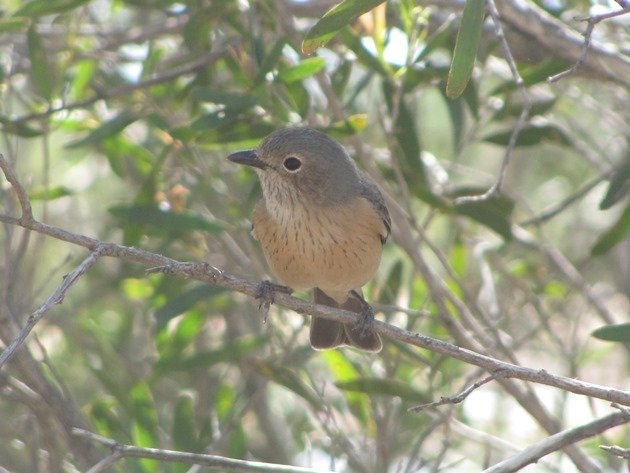 Likewise a Paperbark Flycatcher would hang around in the trees and bushes along the Fitzroy River and visit where we were sat several times a day. There were no doubt insects in the flowering bushes that would attract it even if we were not present. 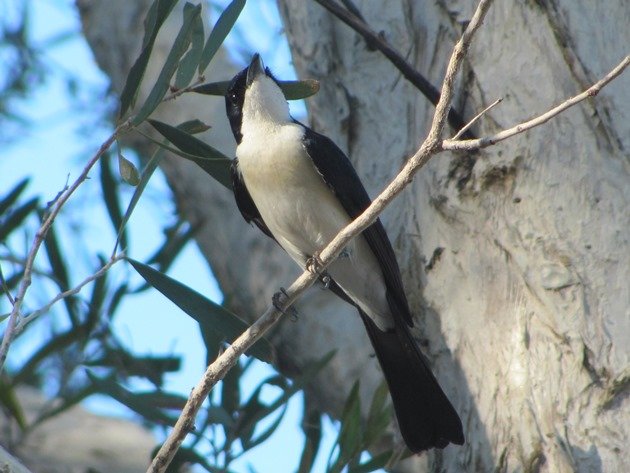 Rainbow Bee-eaters were also attracted by insects along the river and would roost above us in between catching insects. You would often hear the Rainbow Bee-eaters tapping away as they killed an insect by bashing it on the branches before consuming it. 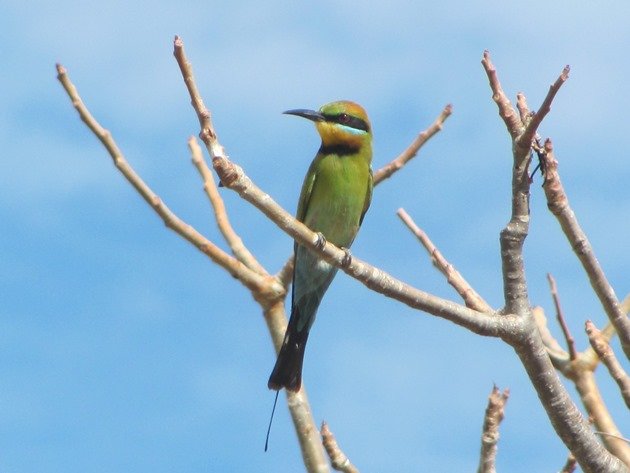 Pied Butcherbirds also moved through the trees looking for food and would stop by and turn leaves over looking for food and whistle their presence early each morning. Grey-crowned Babblers were constantly turning over leaves around the area and chuckling away to themselves and anybody else that would listen. 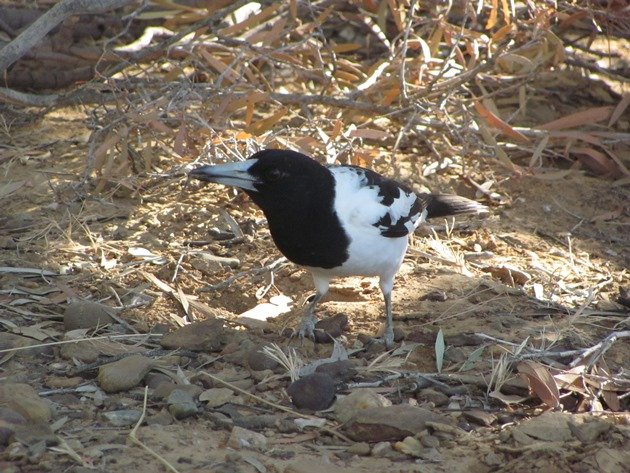 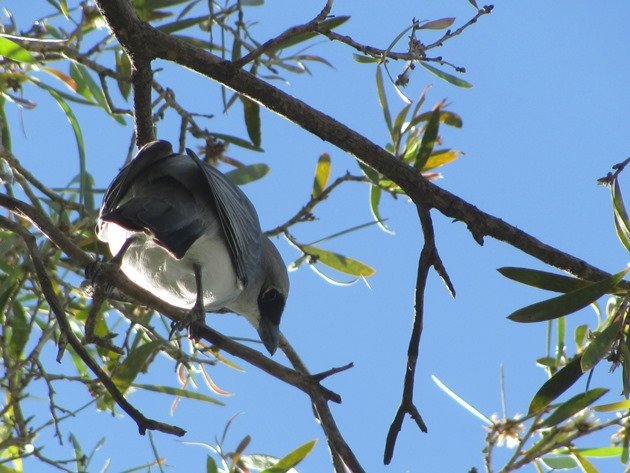 All of the muddy pools of water left behind along the edge of the river were the favoured areas for the finches to come down to drink. The most common finches were the Zebra Finch followed by the Double-barred Finch and then the Long-tailed Finch. On one occasion we did observe Star Finch, but they were no doubt just passing through. The finches would use areas of bush that offered maximum protection and then drop down to the water’s edge to drink and bathe. 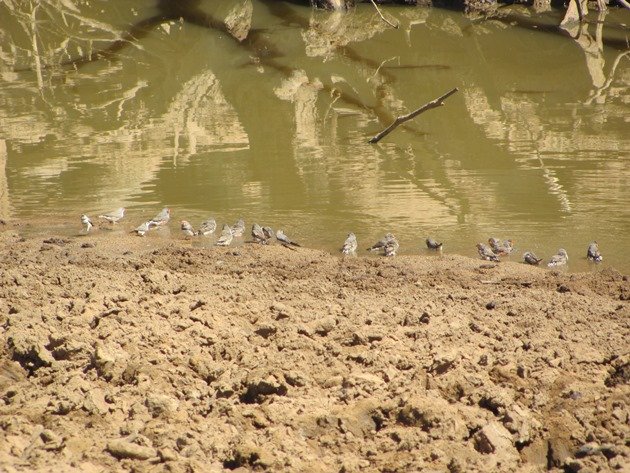 This area along the Fitzroy River has been an excellent place to observe Varied Sittellas over recent weeks and on our first visit they reliably showed up at our camp spot at 3pm each day. The following visit they became morning visitors and by the third visit they hung around for most of the day. The Varied Sittellas are incredibly hard to photograph, because even though there were usually six of them in the group they would bounce around the trees so fast. They would hang upside down picking insects from the underside of leaves and pull at the bark of the paperbark trees and almost tease me as I would stand waiting patiently with my camera! Finally I managed to get some photographs! 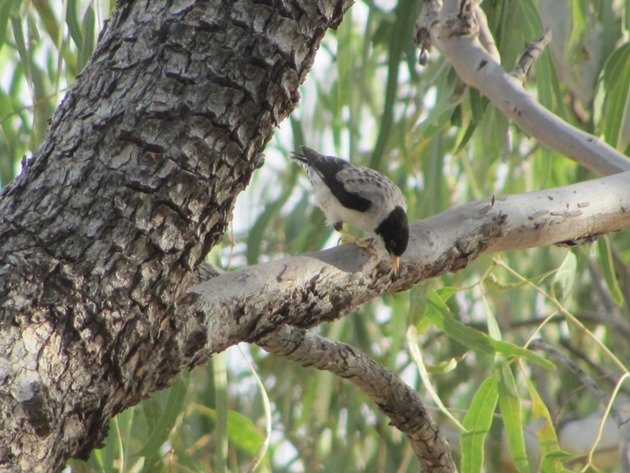 A pair of Variegated Fairy-wrens appeared to inhabit the paperbark trees around our camp area and they would spend the whole day hopping around on the ground and quite high up into the trees. They would call shrilly to each other and were also determined to avoid capture by camera! My best effort involved the male Variegated Fairy-wren almost taking off, so it looks rather “stretched”! 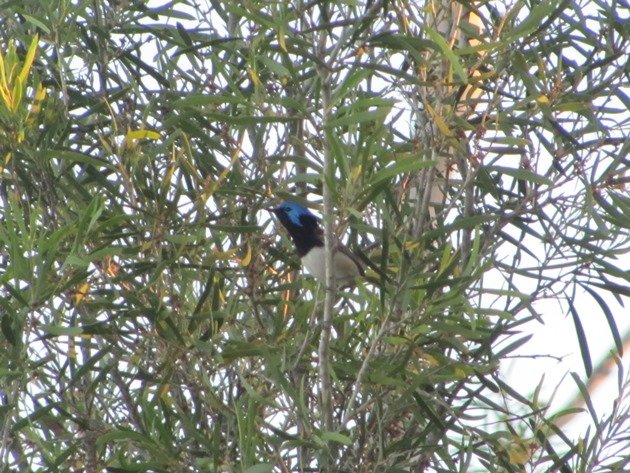 Male Variegated Fairy-wren about to take off!

The dove family were represented by Peaceful Doves, Diamond Doves and Bar-shouldered Doves and Crested Pigeons came down to the river to drink regularly. Blue-winged Kookaburras had the first and last laugh each day and occasionally laughed during the day! We only saw a Sacred Kingfisher on one occasion, but with such a long river and so much choice of places to roost that was not surprising. Little Woodswallows, White-breasted Woodswallows and both Tree Martins and Fairy Martins often swooped low over the Fitzroy River during the day. The smallest birds in the area were the Weebill, which is a very cute little yellow bird that I have not been able to photograph yet and the Striated Pardalote. The melodious call of the White-throated Gerygone often attracted our attention and is another bird eluding me when it comes to photographing it well!

So, now you have an insight into what you can find at Langi Crossing during our cooler months of the year, which are May to September. The gravel road may not always be accessible after heavy rains during our Wet Season-October to April, but if you can visit the area you are sure to find an excellent selection of birds both large and small! 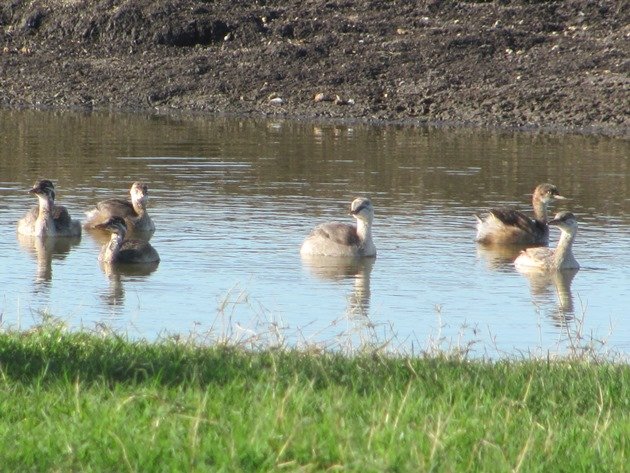 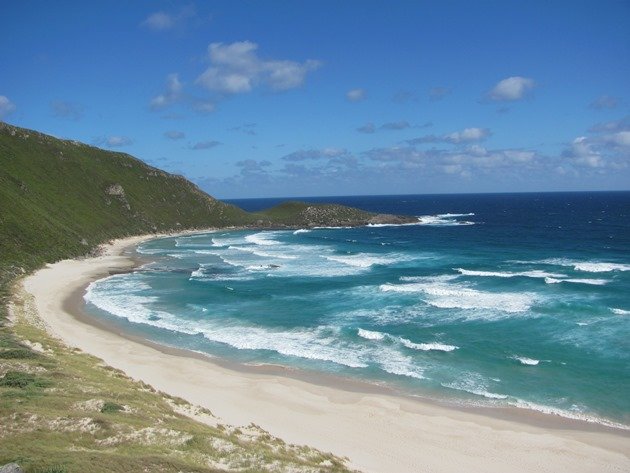