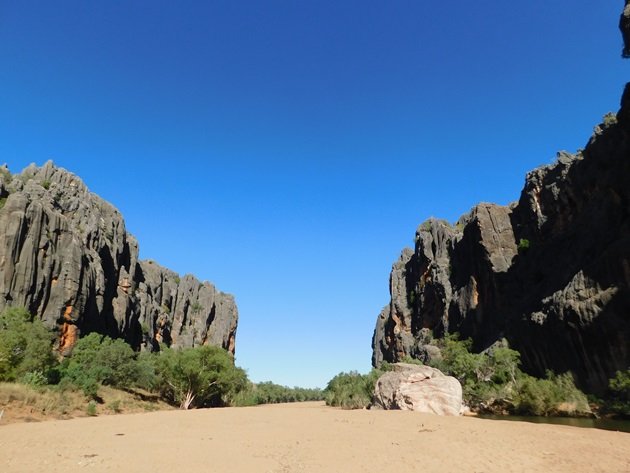 As we all well know there is something very different about 2020. Following on from our first camping trip for 2020 we took another camping trip a bit further afield. Having observed the Cattle Egret in breeding plumage at the Derby Poo Ponds on June 19th we found ourselves at Windjana Gorge first thing the following morning. I have written about Windjana Gorge before, because we try and visit it most years. It is only accessible a few months each year when the land dries out after monsoonal rains. Some years we have visited it at the start of the dry season and again later in the year before the rains come. It is usually open May until November, but each year it varies depending on the rainfall.

We knew our visit to Windjana Gorge would be different this year for many reasons. Despite it being a Saturday there was only a handful of four-wheel drives visiting throughout the day. Western Australia remains closed to everybody from everywhere. It does not matter if you are from interstate, because our borders remain closed. It is only recently that we could move out of the Shire of Broome into the rest of the Kimberley and allowing the rest of Western Australia into the Kimberley has only happened recently too. There has been an influx of people recently as they seek warm weather. There are a few backpackers trapped in Western Australia and they have come north too in search of sun, sea and sand. Some days it is hard to comprehend what is going on beyond our normal lives. Sometimes everything appears normal, but of course it is far from normal.

In the car-park we encountered a Red-backed Kingfisher and a Great Bowerbird. A Wedge-tailed Eagle soared overhead alongside Black Kites and Whistling kites. Entering Windjana Gorge early in the day we encountered Short-eared Rock Wallabies. We know they inhabit the area, but other years when busloads of international and local tourists enter the gorge they soon disperse. We soon added Sandstone Shrike-thrush to our 2020 bird list and it is a great place to find them without too much walking. Green-backed Gerygones were calling and it is a species we always seek out when we visit. White-gaped Honeyeaters, Yellow-tinted Honeyeaters, Brown Honeyeaters, Little Friarbird, Magpie-lark, Willie Wagtails, Bar-shouldered Doves, Peaceful Doves, Striated Pardalotes, Black-faced Cuckoo-shrikes, Grey-crowned Babblers, Double-barred Finch, Rainbow Bee-eaters, Mistletoebirds, Olive-backed Orioles and Little Corellas were soon written into our notebook. 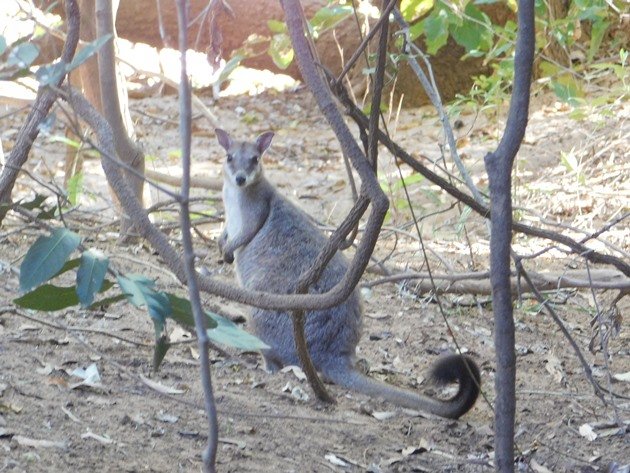 The water level was lower in the gorge in many areas. Some years you will note from my previous posts that you can easily see over one hundred crocodiles in the first large pool and on the banks. This year is completely different. There are crocodiles to be seen, but not in huge numbers at all. The crocodiles must be waiting out the dry season at another area along the river. 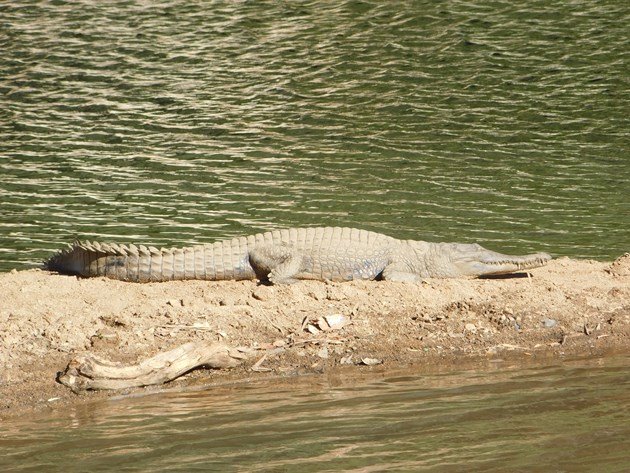 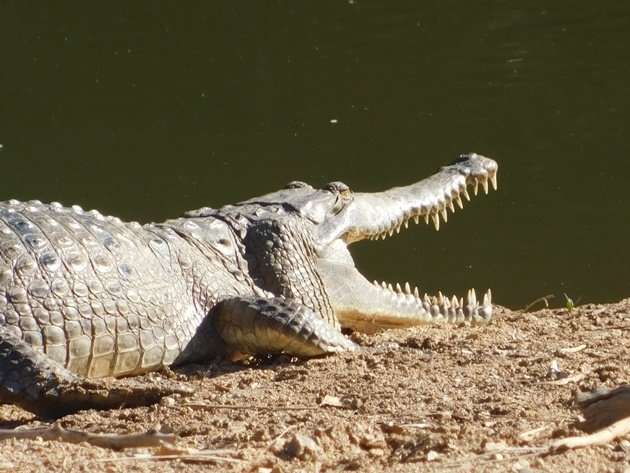 A couple of crocodiles

The bird-life was quite different too this year. There were no ducks, herons or ibis and only one Great Egret in the length of the gorge that you can walk. There were several pairs of Black-fronted Dotterels along the edge of the water. There was a small group of Sulphur-crested Cockatoos being destructive as usual! 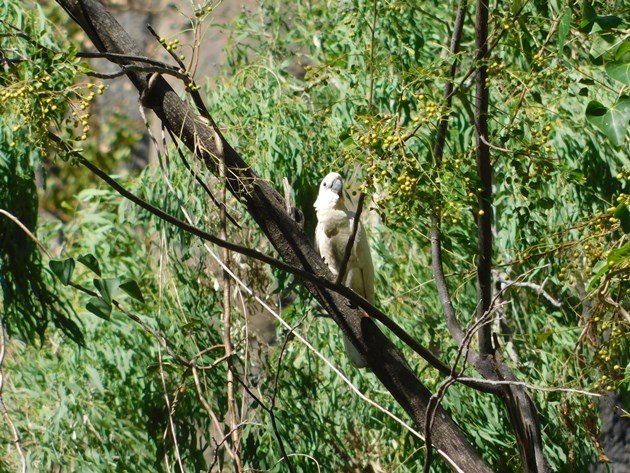 We always walk the length of the trail taking our time to observe all of the birds. The trail had not been clearly marked since the opening of the park this year, so there were old trail markers from many years ago and new markers and also wallaby tracks. There appeared to be a lot more natural debris washed into the gorge this year too. The sand was piled high from where the water would have run months ago. A small group of Spinifex Pigeons wandered down for a drink. They are always a delight to see with their erect feathers on their heads! 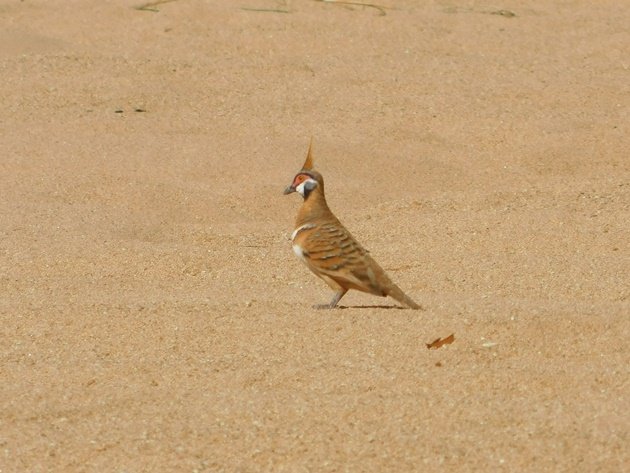 Spinifex Pigeon in the gorge

A Northern Fantail kept teasing us by flitting ahead. It swooped and dipped feeding on insects and finally settled momentarily. I was able to take a few photos, but head on they do look like quite a grumpy bird! 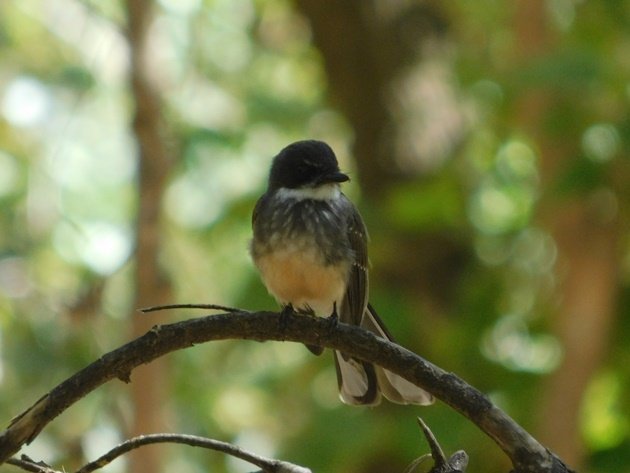 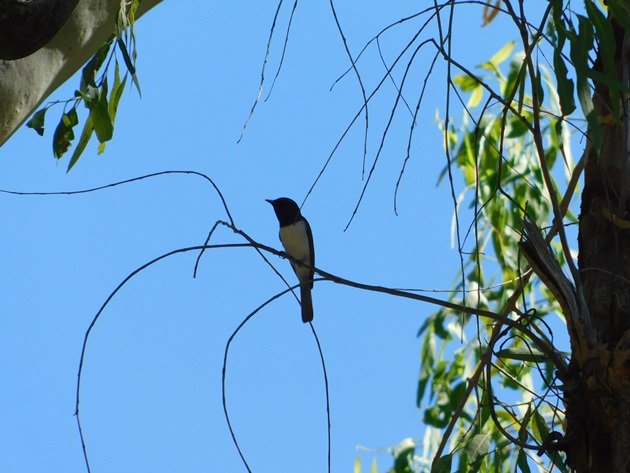 We spent several hours at Windjana Gorge and there was a great variety in wildlife as always. The last birds onto our list were Blue-winged Kookaburra and Black-breasted Buzzard.

There are a lot of differences to 2020 to other years, but some parts of life carry on as if nothing is different. Thank goodness for nature for all of our sanity! 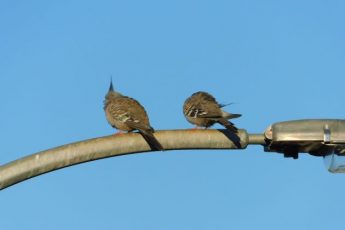