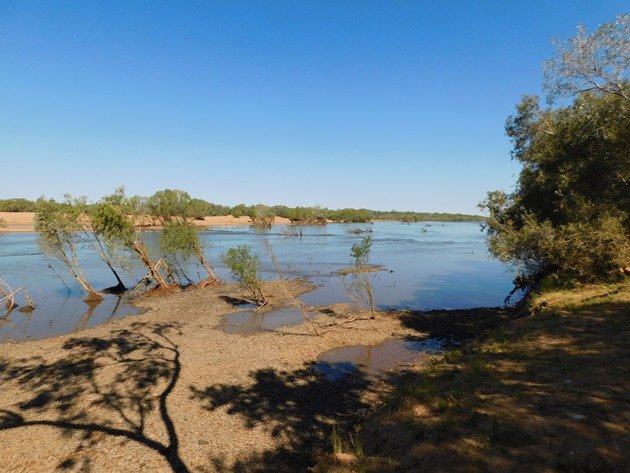 After camping by the Fitzroy River for Grant’s birthday on April 24th we returned for a night after my birthday trip. As you can see in the header photo the river level had dropped considerably in two weeks. According to the river height website the level was down 50cm at Willare Bridge, which is upstream from there. The below photos also show you the new water level after two weeks.

As you can see there are now areas for birds to land in front of where we camp. There is a substantial drop-off, so we are protected from crocodiles too. With the change in temperature there are also more freshwater crocodiles visible. The birds never appear concerned about the crocodiles and wander very close to them, especially if there is food in the shallow water.

We had several birds drop in right in front of us during the afternoon. They seemed oblivious to us sitting on the bank overlooking the riverbank. There was a great selection of Egrets including Intermediate Egrets, Great Egrets and Little Egrets. There were also White-faced Herons, White-necked Herons and White Ibis.

We had not seen an Australian Pelican on our last visit, but now the water level had dropped there was one lone bird. The Black-necked Storks were busy fishing as were the Gull-billed Terns and White-bellied Sea-Eagles.

Great Bowerbird at the river pools

The insect eaters were enjoying the river too. There were Black-faced Woodswallows, White-breasted Woodswallows, Rainbow Bee-eaters and Tree Martins at the end of the day and first thing. The Black-fronted Dotterels were still in the area too.

At night we were able to listen to Nankeen Night-herons, Boobook, Barking Owls, Tawny Frogmouths and Australian Owlet-nightjars. There was the wailing of the Bush Stone-curlew on dusk as usual.

Several bird species just flew across the river or along the river and were duly recorded. Red-collared Lorikeets, Red-winged Parrots, Galahs, Red-tailed Black Cockatoos, Sulphur-crested Cockatoos, Australian Bustards, Black Kites, Whistling Kites, Torresian Crows, Crested Pigeons and Black-faced Cuckoo-shrikes were in the area. The Red-browed Pardalotes and the Striated Pardalotes were also calling around our camp. The Varied Sittellas had moved from the area that we camp in the two weeks since we had been there, though.

Our bird list for the overnight was not quite as long as the two nights we spent there for Grant’s birthday. It was interesting to see the changes in the river over two weeks and it will continue to change over coming weeks and months. We do not expect to see rain in the north of Australia for many months now, so the land will soon dry out and the birds will move around to where the water remains. Ten Ways To Be A Better (Online) Birder