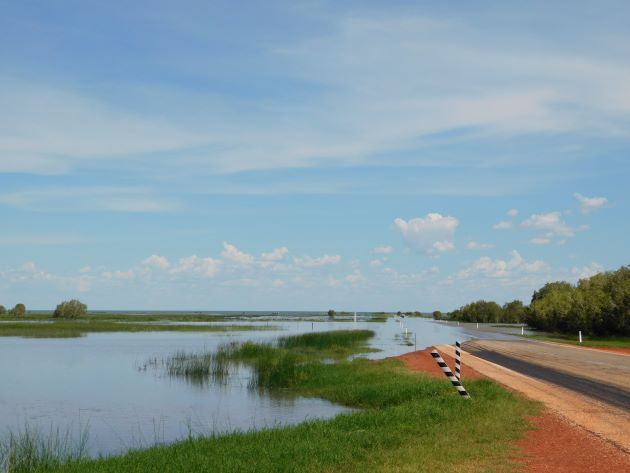 Last Sunday we checked the Travel Map to see if we would be able to drive across Roebuck Plains on the Great Northern Highway to the south of Broome. There had been more rain in the past week and the area has a huge catchment, so we knew it was highly likely the water across the highway may be quite deep. It had been two weeks since we had driven across the plains and the water level was higher. The website advised the water across the highway was approximately 300mm deep and they were allowing vehicles through. It was sunny and around 40c, so it was a good excuse to go and see what birdlife we could find and sit in some air-conditioning too! The header photo is of the highway as we drove towards the Roebuck Plains area. This is the only highway between Perth and Darwin, so nobody wants it closed for too long.

As we drove towards the water we could clearly see that the land was flooded as far as we could see both inland and towards the Indian Ocean. The Roebuck Plains section of the highway is around 15 kilometres long and there were several very long sections of water across the highway. Only the first section was flowing at any significant speed and driving very slowly it was passable.

Driving along the Great Northern Highway

Over recent weeks the highway has sustained some damage from all of the water and they have marked the centre with cones where the bitumen has washed away. We were travelling slowly to prevent damage to the highway and also to keep the glass on our windows clear for birdwatching!

Even when you drive as slow as is feasibly possible you can’t help but make a wake. It appeared that many of the birds that we had seen on earlier visits this year had abandoned the area due to the huge expanse of water. It really can be too wet for ducks!

It soon became clear that the majority of the birdlife was in flight due to the flooded landscape. Glossy Ibis were by far the dominant species and we observed hundreds of them in flight as we crossed Roebuck Plains. It is highly likely that the Glossy Ibis will have a significant breeding colony close by, not dissimilar to 2017.

Although the majority of the Ibis were Glossy Ibis, there were also Straw-necked Ibis and Australian White Ibis. There were also Magpie Geese in flight and they will have most likely found somewhere to breed locally as they have in previous wet years. Despite so much water there were a few Pacific Black Ducks, Grey Teal, Hardheads, Wandering Whistling-Ducks, Australasian Grebes and Eurasian Coots.

Whiskered Terns and Gull-billed Terns were making the most of the food available and also Great Egrets, Little Egrets, a White-necked Heron and a Royal Spoonbill. When we reached the far side of Roebuck Plains the water level had dropped in recent days and it had left a “tide line”. There were sixteen Black-fronted Dotterels running along the edge of the highway close to the water.

Black-fronted Dotterels on the edge of the highway

There were also Masked Lapwings, Black-winged Stilt, Little Curlew, Wood Sandpiper and Red-kneed Dotterels on the far side of Roebuck Plains. The highway was a popular route for lizards, goannas and other reptiles that were a bit sick of all the water. Sadly some had been hit by traffic, but as is often the case the raptors were not far away to clean up.

The Black-shouldered Kites were still in the area and also a White-bellied Sea Eagle. Along the edge of the highway there were still a lot of Australasian Pipits and Singing Bushlarks. The main difference since we had been there two weeks ago was that the majority of the tadpoles were now frogs. The small amount of land that was not flooded was covered in small frogs. There are a large variety of frogs in the Kimberley region of Western Australia, but these appeared to be mostly young Giant Frogs-Cyclorana australis.

Although we only encountered around 40 bird species from the Roebuck Roadhouse to the far side of Roebuck Plains and back we were delighted to see so much life. There’s the potential for a lot more rain before the wet season is over, but even if there isn’t, the land has had a good soaking this year so far. 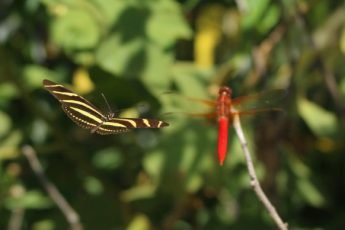