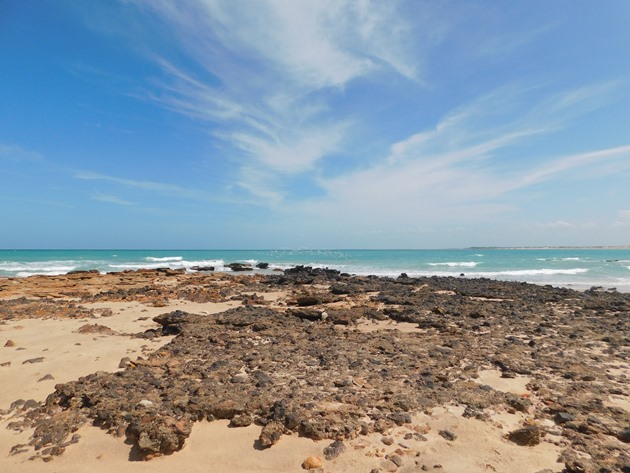 Whenever we can we go birding on Christmas Day and make a list of the birds that we see. We then follow up a week later on New Year’s Day with a new list to start the year. Every year is different even around our home due to the environmental changes. Some years we have had good falls of rain by Christmas and other years we are still waiting when the New Year arrives.

We had already done our Christmas Day bird list and achieved 110 bird species around the Broome area. We were very pleased to find 82 of the bird species in the town area and then travelled out of town to the last remaining water at an ephemeral lake close to the highway to achieve 110 by the end of the day.

On New Year’s Eve we had a walk around our local parks to see what was around after the small amount of rain and I wrote about that last week. The following day we decided to start the day and the list once again around our local area once we had written down the early morning visitors to our garden. It was good to see the Olive-backed Oriole and the Tawny Frogmouths in the exact same trees as the day before!

The Red-winged Parrots and Little Friarbirds were balancing high in the trees watching us!

We don’t always do the exact same route on Christmas Day and on New Year’s Day, but this time we did. The list can vary due to the tides or weather conditions and this time it was no different. In the Cable Beach area we heard the Eastern Koel and also found a Frilled-neck Lizard enjoying the early morning sun.

We continued to add birds to the list as we continued to Gantheaume Point, which is the header photo. It is always a good location for Pied Oystercatchers, Sooty Oystercatchers, Eastern Reef Egrets, Terns, Osprey and a variety of shorebirds. We soon added Greater Sand Plover, Lesser Sand Plover, Ruddy Turnstone, Grey-tailed Tattler, Terek Sandpiper, Red-necked Stint, Great Knot and Common Sandpiper to the list. We also found an Australasian Pipit that did not want to face the camera!

Australasian Pipit at the beach

We continued around to the port of Broome and then to the Poo Ponds. Although there are not a lot of birds currently at the Poo Ponds we soon added Australian Pelicans, Masked Lapwings, Royal Spoonbills, Pacific Black Ducks, Hardhead, Plumed Whistling-Ducks, Coot, Black-winged Stilt, Straw-necked Ibis, Australasian Grebe and Eastern Yellow Wagtail.

Australian Pelicans at the Poo Ponds

Due to the high tide we only found Whimbrel from the lookout in town and we were quite disappointed that we had only made it to 65 bird species around town instead of the 82 the week before. However, it was only 11am and we then followed the route from Christmas Day. The next surprise was a second Frilled-neck Lizard! This time it was on a tree trunk and looked quite pale in comparison to the one earlier in the day. We never tire of seeing this species of lizard!

Heading across Roebuck Plains it was miserably dry. Four years ago at this time of year it was so flooded the highway was closed and supplies had to be flown or shipped to Broome. Brown Falcon, Brown Songlark and Horsfield’s Bushlark were the only species surviving in the dry environment. Even last year we had lots of water in that area.

We then headed towards Derby and went about 75 kilometres from Broome where we knew there should still be a little water remaining. There had also been rain in that area, but it was evaporating almost as fast as it fell. The weather was hot and dry and the birds that were near the water were trying to keep cool. Little Curlew and Oriental Pratincoles stood either in the water or close by. Common Greenshank, Marsh Sandpiper, Red-capped Plovers, Sharp-tailed Sandpipers and Wood Sandpipers were feeding either in or around the shallow remaining muddy water.

The remaining water really was shallow and you only have to look at how deep the birds are when they are stood in it to see what I mean!

Black-winged Stilt in the deep section!

We continued on for 5 more kilometres to where we knew there was water right against the highway. We were delighted to find Glossy Ibis feeding on the flooded landscape to become bird number 97. There were eight Dollarbirds all dipping into the water and a nice variety of bird species. We added Little Egret and Fairy Martins and the sky started to go incredibly black and stormy. It was clearly an isolated storm and would not be raining a few kilometres down the highway.

We started to head back towards town and stopped at the phone tower to check for birds of prey. There had been a Nankeen Kestrel near there earlier in the day and just before the storm hit we saw a Peregrine Falcon. The Peregrine Falcon became our 100th bird of the day, but the rain prevented photographs! The rain fell torrentially and we backed out quick!

Heading back to town the sky cleared and then we added Australian Magpie to our list and that was the first day of 2022 with 101 bird species. We have not had a chance to target any other species yet due to work commitments, but there are several locations we can easily go to around the local area to top the list up.

I hope you have all had a good start to your 2022 bird list!

Best Bird of the Weekend (First of February 2018)